You are here: Home » Articles filed under: 'News' » Article: 'Beyond Touchscreen' 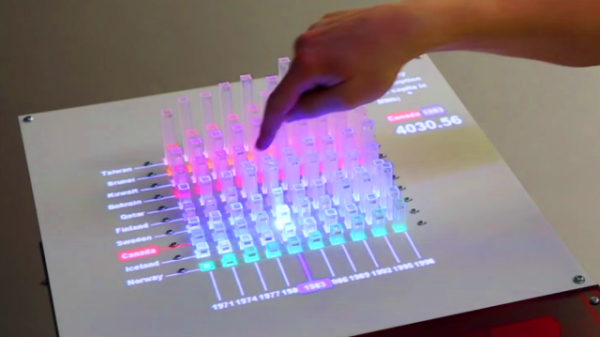 Rachel Pincus, Manipulate and Tug On a 3D Interactive Display With Your Hands, psfk.com, 23 November 2015

The team behind Ultrahaptics is working to make three-dimensional experiences that go beyond touchscreens.

With so much of contemporary technology centering around touch screens, it’s easy to lose sight of an important part of the world of three dimensions: touch and feel. Technologies like Ultrahaptics have used ultrasound to miraculously recreate the sensation of touching something. There’s something even cooler afoot, though: Ultrahaptics is an outgrowth of a larger, EU-supported research project called GHOST (Generic, Highly-Organic Shape-Changing Interfaces) that intends to add a 3D interactive display aspect to these phantom experiences.

The project, spearheaded by English, Dutch and Danish researchers at various universities, aims to create deformable displays and build on the ultrasound technology to make those displays feel-able and even squishable.

You can already see the technology at work in GHOST’s various prototypes. “Emerge,” for example, allows data in bar charts to be pulled out of a screen by your fingertips. You can then use this method of interaction to rearrange data and break it down differently. The team is also studying the devices as a way of modulating and playing music, displaying information and allowing for interaction at the same time. Other applications envisioned by the team include neuroscience, where flat displays have begun to show their limitations in displaying the very complex, very three-dimensional organ known as the brain.

The GHOST team hopes to make this technology portable with devices called “morphees” that are made of lycra or alloys that bend and stretch according to use, expanding to make data bigger, for example, and shrinking down to fit inside your pocket. Another project called “LeviPath” uses the ultrasound technology to move and “levitate” objects across pre-determined 3D spaces.