You are here: Home » Articles filed under: 'News' » Article: 'Big, baffling and bounteous' 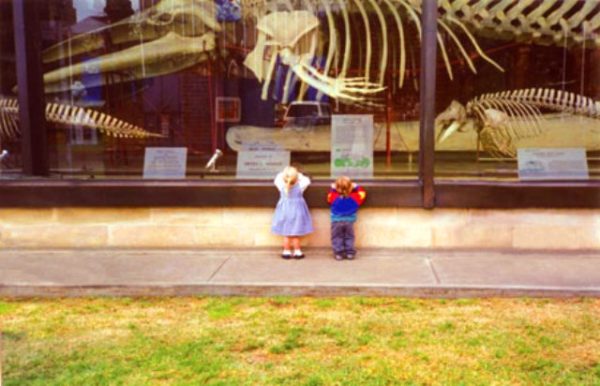 Education of young and old is an important role of a museum
photograph by SA Jarvis, South Australian Museum.

The South Australian Museum’s marine mammal collection began in the late 1800s and has benefited since from the keen influence of directors, curators and researchers. It is now the largest and most comprehensive in Australia, numbering over 2200 specimens and 59 species. Research emanating from the collection has contributed substantially to the understanding of the biology of Australia’s marine mammals and their conservation. A unique preparation facility uses efficient processes and results in high-quality specimens. Marine mammals are included in five displays that engage the visitor to the museum and staff and honorary researchers are frequently in the media through the focus of their work. The collection and its associated data are researched by museum, national and international scientists. At least 90 scientific publications have been written using museum specimens, over half of these since 1990 when the collection underwent considerable expansion.[1]

In 1881, the South Australian Museum sent newly appointed taxidermist, George Beazley, and a collecting team to recover the skeleton from an adult sperm whale that had washed up at Point Bolingbroke, near Port Lincoln, South Australia. The task was extremely difficult because the whale was very big – a full-grown male measuring 18.7 metres – and it needed to be flensed, disarticulated and transported by ship to Adelaide. The skeleton was then cleaned by maceration, whereby flesh rots off the bones in water. The sperm whale skeleton is still on display at the front of the museum on North Terrace, Adelaide. Two years after the sperm whale was collected, an unusual whale washed up on the Yorke Peninsula and its skeleton was purchased for display. As with many museum specimens, it baffled those who attempted to identify its species. It wasn’t until 1971 that Peter Aitken, Curator of Mammals, confirmed it as a Bryde’s whale.[2] One of the primary roles of museum natural history collections is to ‘vouch for’ an animal being recorded at a certain date and place, and to be able to verify its species identification over time. The Bryde’s whale from the Yorke Peninsula is a case in point even though its identification took 88 years.

In the 19th and early 20th centuries, museums around the world collected large whale skeletons primarily for display, because they were a major drawcard for visitors, thus increasing a museum’s visibility in the public’s eye. Their gargantuan size, unusual body form and the mysterious environment in which they lived elicited a sense of wonder.[3] To add to this, there was also the intrigue of stories depicting the thrill and danger of hunting told by whalers.