You are here: Home » Articles filed under: 'News' » Article: 'Biggest ever Vermeer show gets bigger:'

Biggest ever Vermeer show gets bigger: 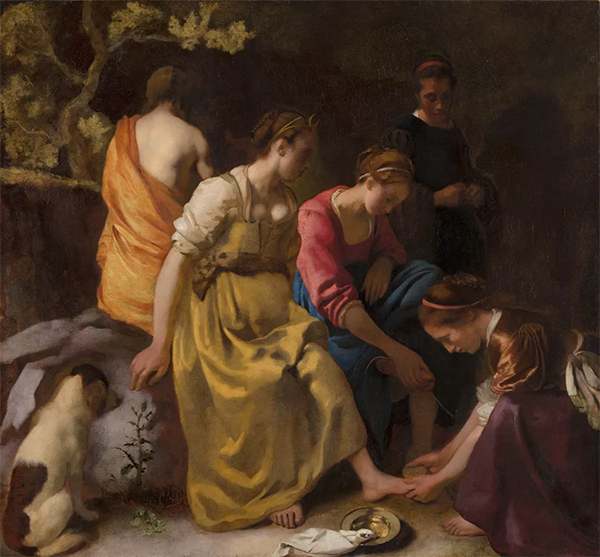 Johannes Vermeer’s Diana and her Nymphs (1653-54), part of Mauritshuis collection, will now join the Rijksmuseum’s exhibition. Courtesy of the Mauritshuis, The Hague.

At least 28 paintings, out of around 35 known works by the artist, will go to Amsterdam next year.

The Rijksmuseum in Amsterdam is to show at least 28 paintings from Johannes Vermeer’s very small oeuvre in its major retrospective next year. Until now the largest show on Vermeer was held at the Mauritshuis in The Hague in 1996, with 23 works. “Seeing all the works together will be an experience even Vermeer never had,” says the Rijksmuseum’s director Taco Dibbits.

The idea for the exhibition Johannes Vermeer (10 February 2023-4 June 2023) came when the Rijksmuseum curators realised there might be an opportunity to borrow the Frick Collection’s three works by the artist. The Frick in New York is normally unable to lend under the conditions it was established upon, but it is now involved in a building project and the works would have had to be moved anyway. Permission was therefore eventually granted. Officer and Laughing Girl (around 1657), Girl Interrupted at Her Music (1658-59) and Mistress and Maid (1666-67) will be coming to Amsterdam. 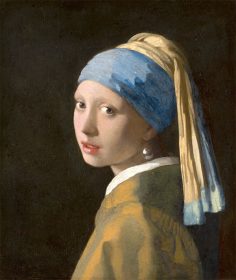 Johannes Vermeer’s Girl with a Pearl Earring (1665-67). Courtesy of the Mauritshuis, The Hague.

A Rijksmuseum spokesperson says there are “about 35” known Vermeer paintings. These include The Concert (1663-66), which was stolen in 1990 from Boston’s Isabella Stewart Gardner Museum. This means that only around six of the world’s obtainable Vermeers will be missing from the Rijksmuseum retrospective.

The works that will not travel include the Royal Collection’s Lady at the Virginals with a Gentleman (early 1660s), which is now regarded as too delicate to lend. A Maid Asleep (1656-57), at New York’s Metropolitan Museum of Art, cannot be lent because of conditions laid down in the Benjamin Altman bequest. 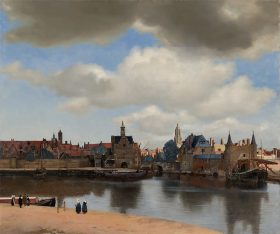 Johannes Vermeer’s View of Delft (1660-61)
Courtesy of the Mauritshuis, The Hague.

Along with already announced loans, works now expected to come to the Amsterdam museum include Diana and Her Nymphs (1653-54) and View of Delft (1660-61) from the Mauritshuis in The Hague; A Lady Writing (around 1665) and Girl with a Red Hat (around 1669) from the National Gallery of Art in Washington, DC; and A Young Woman Standing at a Virginal (1670-72) and A Young Woman Seated at a Virginal (1670-72) from London’s National Gallery. 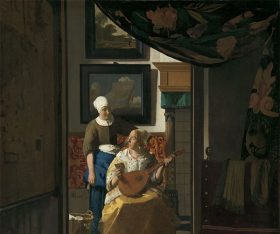 Johannes Vermeer’s The Love Letter (1669-70)
Courtesy of the Rijksmuseum, Amsterdam. Purchased with the support of the Vereniging Rembrandt.

Many of the paintings have been subjected to scientific investigations for the exhibition, in collaboration with the Mauritshuis. Dibbits reports: “The conventional understanding that Vermeer painted slowly and with great thought must be revised. His end results may appear introverted and contemplative, but his working method is virtuosic and rigorous.”

Much more contextual research has been undertaken on Vermeer’s social position, living environment and contact with artists and fellow citizens. Copious archival information was published over 30 years ago by John Montias in his pathbreaking book Vermeer and His Milieu (1989), but since then this aspect of Vermeer studies has not had quite the attention it deserves. More will be revealed in the forthcoming exhibition catalogue.