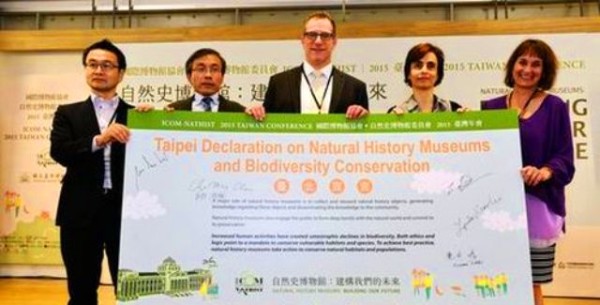 Taipei, Oct. 21 (CNA) The International Committee of Museums and Collections of Natural History (ICOM-NATHIST) on Wednesday called on natural history museums to take action to conserve natural habitats and populations.

The call was made in a declaration released upon conclusion of the non-governmental organization’s 2015 conference in Taipei, which was attended by delegates from the Paris-based organization’s 30 regional and national committees Oct. 18-21. .

At the end of the four-day meeting, ICOM-NATHIST President Eric Dorfman said the Taipei declaration expressed the expectations and promises of the natural museums regarding biodiversity conservation.

“Increased human activities have created catastrophic declines in biodiversity. Both ethics and logic point to a mandate to conserve vulnerable habitats and species,” the declaration stated.