You are here: Home » Articles filed under: 'News' » Article: 'Bird Photographer of the Year Awards 2021'

Bird Photographer of the Year Awards 2021

“Blocked” by Alejandro Prieto. Overall Winner and Bird Photographer of the Year 2021 (courtesy of BPOTY).

Valentina Di Liscia, See the Striking Photos that Competed for the Bird Photographer of the Year Awards, Hyperallergic, 9 September 2021

The admittedly niche field of bird photography does not immediately conjure images of urgent political import, yet that’s exactly what Alejandro Prieto achieved with his winning entry for this year’s Bird Photographer of the Year Awards. “Blocked” (2019), the Mexican photographer’s stirring capture of a roadrunner stopped in front of the infamous US-Mexico border wall, speaks evocatively to our most urgent humanitarian and environmental crises.

Extending 1,9oo miles from the Pacific Ocean to the Gulf of Mexico, the border traverses one of the nation’s most biologically diverse regions. The wall covers around 650 miles, much of it fortified with miles of new steel fencing during the Trump administration, a cruel barrier to countless asylum seekers. According to the Pew Research Center, nearly 200,000 migrants attempted to cross the border this July, a 21-year high.

The border also traverses one of the nation’s most biologically diverse areas, spanning six different ecological regions. The wall has a detrimental impact on its animal population, blocking the migration routes of longhorn sheep, black bears, bison, jaguars, and many others. 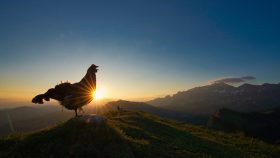 “The border wall crosses deserts, mountains, and even mangroves,” Prieto said in a statement. “It is not just desert, and is in fact very biodiverse with more than 1,500 animal and plants species threatened by the wall.”

“I have watched many different animals reach the wall before turning around and heading back,” he added. 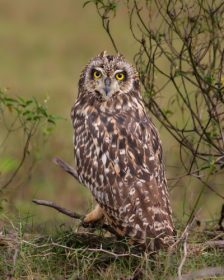 “Blocked” was selected from 22,000 submissions by photographers from around the globe. The annual Bird Photographer of the Year (BPOTY) competition awards £5,000 (~$6,920) to the overall winner and prizes such as camera equipment and binoculars to runner-ups across eight categories, like “Best Portrait” and “Attention to Detail.”

The contest also celebrates the work of young photographers, including children eight and under like Deeksha Sambath, who captured a wide-eyed short-eared owl in her hometown of Chennai, India, from the window of her dad’s car. The Young Bird Photographer of the Year prize was awarded to 17-year-old Levi Fitze for his entry “Morning Lek,” a portrait of a majestic Black Grouse against the Swiss Alps.

You can peruse the winning entries of the 2021 Bird Photographer of the Year contest here.