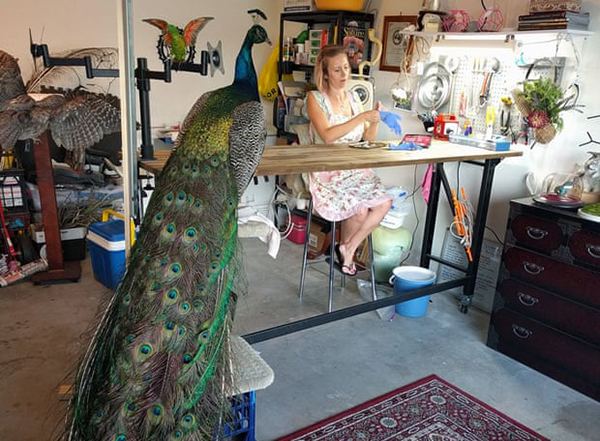 ‘To be able to stand back at the end of the day and have taken a dead creature and brought it back to life, it’s a sweet feeling.’ Lauren Hundloe working on a peacock. Photograph: Lauren Hundloe.

From grieving pet owners to TV shows and major museums, demand for taxidermists remains strong. And birds are a mainstay.

For Lauren Hundloe, bringing dead birds “back to life” is all in a day’s work.

The former public servant turned taxidermist used to stuff animals of all sizes, from mice to elk and everything in between. Now she deals almost exclusively with birds in her Brisbane studio.

Often dismissed as an anachronism or downright bizarre, taxidermists in Australia are defying predictions of the industry’s demise. And birds have proven to be a mainstay.

One of the advantages of working with birds, Hundloe says, is unlike mammals, there is no need to send the skin away to a tannery or use other equipment. It’s just her and the bird.

“To be able to stand back at the end of the day and have taken a dead creature and brought it back to life, it’s a sweet feeling.”

Most of her customers are pet owners who come to her grieving a beloved member of the family.

Unlike mounting a deer or stuffing a wild pig from a hunter, her customers have lived with the animal for years.

Hundloe asks them to provide photos and videos to help her get the expression and pose true to life. “There’s a lot riding on it,” Hundloe says.

Rhonda Bridges was overwhelmed when she saw her pet parrot, Pretty, brought back to life.

“When I saw what Lauren had done, it was just so beautiful, I cried,” Bridges recalls.

Pretty, an eclectus parrot, now perches on a piece of wood, hanging from Bridge’s lounge room ceiling in Brisbane. 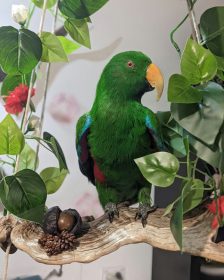 Bridges decided to have Pretty stuffed after he died suddenly aged 15 earlier this year, just 18 months after she lost her husband.

“He loved him because he was such an unusual bird, a bit of a character. That’s probably why I had him taxidermied. Coming so close to my husband’s death, when he died it was like it was another part of my husband going.”

As well as pets, Hundloe provides birds for exhibitions, conducts workshops and demonstrations, and has also been commissioned by television shows, including one order for an eyeless owl for the Netflix series Tidelands. 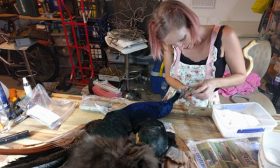 It’s fiddly work but not at all gross, says Hundloe. It starts with an incision down the keel (chest) and the skin is peeled off. She must pull out the insides and the eyes too, but there’s little, if any, blood and guts.

Hundloe describes an almost meditative experience. “Sometimes I’ll be going and I won’t even know if it’s still light or dark outside. I don’t know what the time is because I just get so engrossed in it.” 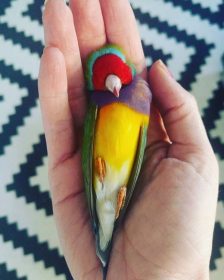 But for some taxidermists it can be incredibly stressful work. At the South Australian Museum a particularly challenging project is keeping the taxidermist Jo Bain up at night.

The former Adelaide Zoo residents Greater and Chile, two much-loved flamingos that became an iconic pair for the LGBTIQ+ community, are being brought back to life.

Working with skin “as strong as wet toilet paper” and unusually shaped bodies has forced Bain to experiment with new techniques to ensure the birds are looking their best when unveiled during the Feast festival in mid-November. It’s a costly process and the museum is trying to raise $40,000 to pay for it.

“I wake up every morning, at about 3 or 4 o’clock, thinking about all the things that can go wrong, and how to approach it the next day,” Bain says. 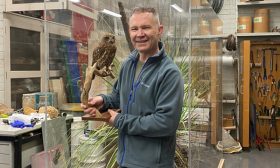 The flamingos’ technical challenges aside, Bain says he generally finds the process a bit dull.

“The process is not what I’m interested in, it’s the final product and what you can get from it, it’s the idea that you can educate people with this material.”

The museum’s mammal gallery is home to the only elephant in the state – living or dead. And Bain points out where else can you see animals side by side that would kill each other if they were alive?

“The idea that a lion could take down this animal next to it, you see the size of the gazelle that it can take down, it really is something you can’t do anywhere else. It has an impact that no picture in a book is going to do.”

While museums do less taxidermy now, Bain says the interest has never dropped off.

“I don’t see it as waning anytime soon.”

On the commercial side, demand remains strong.

Since Gary Pegg won a world championship in bird taxidermy with a black cockatoo in 1999, he says the industry has grown in size and status in Australia.

“It certainly put us on the world map.”

His company based in Thomastown, in Melbourne’s north, is the biggest in Australia. While he works on a range of animals, birds have been his true passion since he started keeping parrots as a child.

Pegg’s lost count of how many birds he has stuffed in his 40-year career, but estimates it at about 8,000. At one point, he completed 250 birds in two months.

The colour, personality and diversity of parrots make them his favourite species.

“From small little lorikeets, right through to the bigger cockatoos and some of the rarer birds that live on the ground, they’re all so diverse, I just find them interesting.”

Right now, his collection of birds numbers about a couple of hundred.

“It’s always a treasure hunt looking for new species, or different coloured varieties of the species that are out there now that you don’t have, so it’s ongoing.”