You are here: Home » Articles filed under: 'News' » Article: 'Birdsong has inspired humans for centuries'

Birdsong has inspired humans for centuries 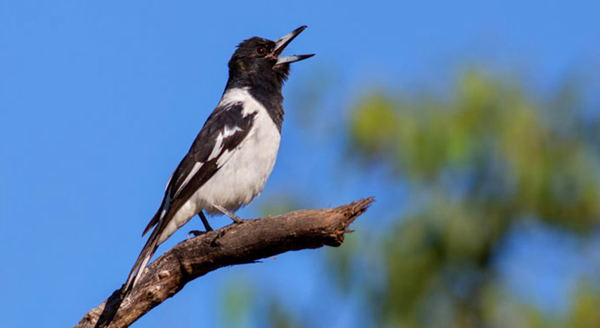 Hollis Taylor, Birdsong has inspired humans for centuries: is it music?, The Conversation, 26 July 2017

On my first trip to Australia from Paris, I heard a pied butcherbird vocalising on a remote sheep station. It sounded like a jazz flautist in a tree. An explosion of sound in another tree answered, and a duet ensued, then a trio. I had no idea birds sang in ensembles. Low, slow, rich, and enticingly familiar – these phrases were an epiphany to me.

I wrote down several of these irresistible melodies in the paddock. As a violinist and composer, I wanted to know more about them. It seemed something extraordinary was transpiring. I soon began studying them full time, both analysing their vocalisations and incorporating them in my music.

Avian choristers have long inspired listeners from all walks of life. It seems fair to ask if birdsong is simply a hard-wired, functional, primitive sound – or could we call it “music”?

Both sexes of pied butcherbirds participate in daytime group singing. However, their solo songs are principally nocturnal and may last as long as seven hours. Each adult soloist sings partially or even completely differently from another, and solo songs transform each year.

Intriguingly, these songsters share many musical sounds and behaviours with human musicians, including approaches to repetition and variation, and shape and balance. Pied butcherbirds are not unique. We also find overlaps with our sense of musicality in the vocalisations of species like nightingales, European blackbirds, and humpback whales.

In attempting to connect musical experience throughout the globe and the ages, many have struggled to define music, but it is nearly always seen as a human trait.

Many have argued that birdsong cannot be music because it is hard-wired. It is true that humans are the only primates with the capacity for vocal learning. Even the elaborate vocal displays of gibbons are innate. But songbirds (which make up about half of the world’s 10,000 bird species), parrots, and hummingbirds, as well as elephants, bats, and some marine mammals are all capable of learning vocalisations.

Biologists refer to this as “cultural transmission”.

Listen: A pied butcherbird solo, with mimicry at the end: DownloadMP3 / 2 MB

Some argue that birdsong is not complex enough to be music. But consider the brown thrasher’s repertoire, which runs to thousands of phrases, likely improvised. They are not alone.

Pied butcherbird solos excel in taking a motif to the limits of expression via elaborate combinations and recombinations. Much like the simple theme in Bach’s The Art of the Fugue, pied butcherbird phrases see many permutations. They assemble their songs like snap-together beads, adding and deleting motifs (or sub-parts) as they go.

Human music can be complex to the extreme. But much human music is simple, repetitive, and formulaic (not to mention clichéd), and lacks complexity in rhythmic and harmonic realms, like the disco music of the 1970s and the electronic dance music that followed it. In fact, repetition and memorability enhance music and are cornerstones of it.

Another objection to considering birdsong to be music is that it plays a purely functional role in their lives. After all, birds may sing to establish and defend territories and to attract mates. A bird’s song may also help maintain groups and families, identify individuals, or serve as a diplomatic code. However, there is no reason to consider function and aesthetics as mutually exclusive.

Just like songbirds, humans use music to affirm their identity, territory and personal taste, to mention just a few of human music’s functions. In short, human music making and responses to it are embedded in other activities, charged with meaning, and shaped by both our biology and culture.

Some people have suggested that only male birds sing, adding to the argument that birdsong is functional. However, this is partly a result of a focus on Northern Hemisphere birds. In the Southern Hemisphere, both sexes of many avian species sing year-round.

To be “bird-brained” is a cliche, but many birds are extremely intelligent, particularly in Australia. In humans, the largest and most important part of the brain is the cerebral cortex, which is responsible for higher cognitive functions. Birds lack this region, but recent songbird studies suggest they can solve cognitive problems like humans, even with a radically different brain structure.

Can birds consciously create their songs? It is impossible to say at this stage. Consciousness is often seen as a defining human characteristic, but emerging research indicates that animals are smarter than previously thought. Rather than animals being automatons, fish can decorate, horses can read human emotions in photographs, and ravens can imagine being spied upon.

Humans love to talk about music, and clearly we can’t tell if birds can. Some scholars insist that music comes from language, that music is language-dependent, and that language undergirds music. Following on this is the assumption that only those with a concept of music and a word for music have it.

However, ethnomusicologists have repeatedly noted sophisticated musical understanding in the absence of verbal analysis of it. Put simply, no animal, human or other, needs a word for or concept for “music” in order to create it.

Finally, some argue that birdsong is not the product of originality, creativity, or genius. At least a fifth of songbirds are vocal mimics. Pied butcherbirds mimic other birds, as well as dogs, cats, and horses. They are also adept at mobile ringtones and car alarms.

With a good-sized repertoire of their own, I wonder what motivates a pied butcherbird to incorporate the sonic constructs of others. Is mimicry akin to a cover band, an audio diary, or a stylistic crossover?

Scientists have yet to unravel the function of mimicry, since it occurs under such diverse contexts. Deception, predator avoidance and defence, and mate attraction are just some of the suggested functions of mimicry.

But just as birds do it, mimicry is equally relevant in understanding the sound world of humans. Originality, creativity, and transcendent genius are often mistakenly assumed to be the starting point for music making. However, borrowing and copying play a significant role at every level of human music. We are not just plagiarists, but imitation is well known to artists of all stripes, including songbirds.