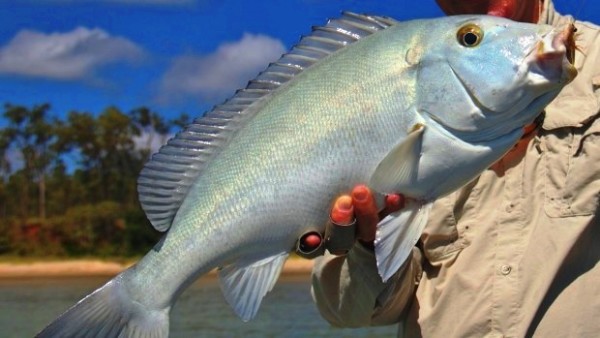 A new species of fish that for many years was known only as a fisherman’s tale has now been officially identified by Queensland Museum Scientists.

Plectorhinchus caeruleonothus or the ‘Blue Bastard’ is a previously undescribed species of Sweetlips living on the shallow reefs of northern Australia that has remained unrecognised by science until now.

The fish has long been the subject of local legend, affectionately known to anglers from Ningaloo Reef to Cape York as the ‘Blue Bastard’ due to the bluish sheen of the fish and the frustratingly difficult time they have in landing one.

Weipa fisherman Ben Bright brought the fish to Queensland Museum ichthyologist Jeff Johnson’s attention when he emailed photos of the fish to him in 2014.

Jeff teamed up with Queensland Museum geneticist Jessica Worthington Wilmer to analyse comparative specimens taken from as far afield as Africa, the Middle East and Japan, using their DNA sequence codes to describe this newest member of the Sweetlips family.

“2014-15 was a hugely successful year for us, with our scientists describing 120 new species ranging from protozoans to mammals.

“We have an incredibly skilled and dedicated scientific team here at Queensland Museum doing important work that will positively impact generations to come.

“It is also wonderful to be able to work with community to bring a new scientific discovery to the world,” said Prof. Miller.

Minister for Science and Innovation Leeanne Enoch said the discovery was yet more evidence of the great science coming out of Queensland and proof that our museums are much more than displays of static objects.

“The Palaszczuk Government’s $180 million Advance Queensland initiative invests in science and research so that we retain a pool of talented scientists to help resolve problems and answer questions fisheries and other industries have,” Ms Enoch said.

“This discovery is an example of why this investment is important and I’d like to congratulate the team at the Queensland Museum for their outstanding work.”

Jeff Johnson said it is amazing that the colloquially named ‘Blue Bastard’ has remained elusive for so long, given its popular acknowledgement within the fly-fishing community.

“It’s quite a unique fish in both biology and behaviour, so in a way it’s surprising it took this long for it to be officially recognised as a new species,”  he said.

The ‘Blue Bastard’ can grow up to one metre in length, and undergoes an amazing transformation in colouration between juvenile and adult growth stages.

The often solitary fish also exhibits a unique ‘kissing’ form of aggressive behaviour between rival males, thought be in defence of their territory, where they will rush each other and lock jaws in prolonged and violent struggles.

The scientific paper on Plectorhinchus caeruleonothus has just been published in the zoological journal Zootaxa.