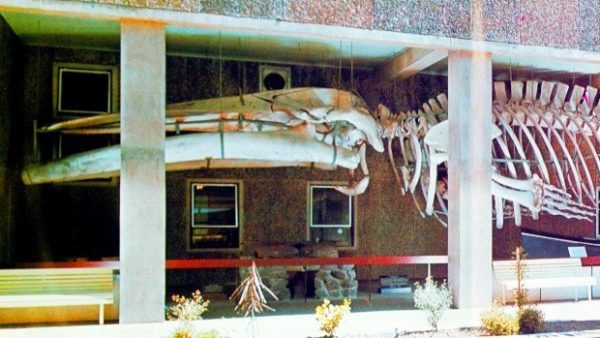 The Blue Whale skeleton was on display in the Canterbury Museum’s Garden Court from 1976 to 1994.

It’s been in hiding for 22 years, but the longest blue whale skeleton in any collection in the world is ready for its big moment.

The 26.5 metre long blue whale skeleton has been in the Canterbury Museum collection since it arrived in Christchurch on a horse and cart in 1908, but the bones slipped from public view in 1994.

There is no space in the museum large enough to display the bones, but they will be the star of a planned future upgrade for the complex of historic buildings.

Almost 200 bones have been in storage since the Garden Court – where they were displayed from 1976 – was covered over when the museum expanded in 1994. The bones were carefully restored over four or five years from 2003.

The whale has been dead for more than a hundred years and was born two hundred years ago, but the bones still exude oil and retain a distinctive smell. The whale’s lower mandible bone is the largest single natural history object in the world, weighing 418 kilograms.

Canterbury Museum’s senior natural history curator, Paul Scofield, said he was keen to get the blue whale back on display.