You are here: Home » Articles filed under: 'News' » Article: 'BM Chair ‘Don’t expect us to be passive’'

BM Chair ‘Don’t expect us to be passive’ 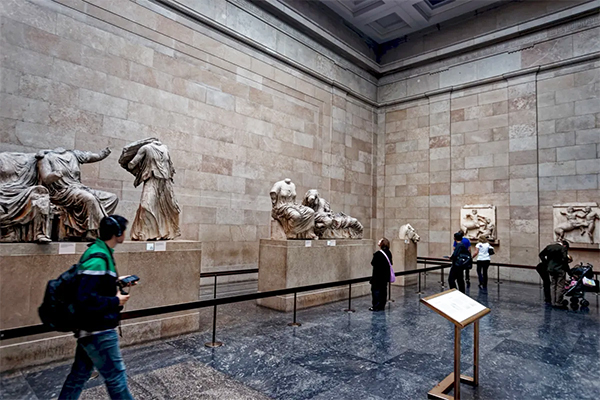 The Parthenon Marbles in London’s British Museum have been a central part of the long-running restitution debate. Photo: Txllxt TxllxT.

Tom Seymour, ‘Don’t expect us to be passive’ in the face of restitution: British Museum chair defies return of looted artefacts, The Art Newspaper, 9 November 2022

In pointed defiance of the growing movement across the international museum sector to return looted treasures to their original places of provenance, George Osborne, the chair of the British Museum, has said contested artefacts currently in the London institution’s holdings will be staying put under his watch.

The former Chancellor of the UK government, who has been drafted in by current Chancellor Jeremy Hunt to consult on further austerity measures, delivered the remarks at the British Museum’s annual trustees dinner on 2 November.

Osborne said: ”We hear the voices calling for restitution. But creating this global British Museum was the dedicated work of many generations. Dismantling it must not become the careless act of a single generation.” Osborne added he believed international courts were on the museum’s side. “The law prevents it,” he later said, referring to the British Museum Act of 1963, which prohibits acts of restitution.

Referring to the restitution movement, Osborne said: “How can we expect to escape from the maelstrom of the moment? We don’t. But don’t expect us to be passive in the face of it.”

Osborne did open the door to the prospect that artefacts from the museum’s holdings could be loaned back to their places of origin. This, in itself, will prove controversial, as some the museum’s most well-known artefacts were forcibly and violently taken from their owners during the British Empire. He said. “For some communities, the status quo is not good enough… I am confident that there are long-term partnerships to be struck.”

The museum’s chair also talked at length about the “masterplan that will see the complete re-imagination of the British Museum”. The major restoration, known as the Rosetta Project, was signed off by museum trustees at a board meeting last month. It could cost £1bn and will make the museum “net zero” in terms of carbon omissions, Osborne says.

The plan will focus primarily on the museum’s currently dilapidated western sculpture galleries that house collections from Greece, Rome, Egypt and Mesopotamia, many of which have been closed consistently over the course of the last three years for repairs.

The museum’s Greek revival architecture, designed by Robert Smirke in the 19th century, will also be restored or completely rebuilt, and a new energy system will be put in to reduce the museum’s carbon footprint. Full details of the plans will be published next spring.

The tone of Osborne’s latest speech on the issue might surprise officials in Athens. Speaking in June, Osborne suggested “there is a deal to be done” over the Parthenon Marbles. In October, Lord Vaizey, Secretary of State for Digital, Culture, Media and Sport during the administration of Osborne and David Cameron, joined the advisory board of the Parthenon Project, which seeks the return of the objects “in their home city of Athens” under a “cultural partnership” between Britain and Greece.

The British museum also houses a large number of Benin bronzes, many of which were looted under imperial rule in what is now Nigeria, as well as sacred tabots forcibly seized by the British army in Ethiopia in 1868.

Benin Bronzes on display in the British Museum. Photo: Son of Groucho.

Last month, the Smithsonian Institution in Washington, DC, who administrate the The National Gallery of Art, the Smithsonian Institution’s National Museum of African Art and the Rhode Island School of Design Museum, held a joint ceremony on 11 October to mark the return of 31 Benin bronzes from their respective collections to Nigeria. The artefacts are now under the custodianship of Nigeria’s National Commission for Museums and Monuments. Yesterday, a new online database pinpointing the locations of looted Benin artefacts was launched. The new inventory shows that the British Museum holds the highest number of pieces from the kingdom of Benin (944).

In a tweet, Ian Lawley, a museum consultant and the former Head of Museums for Stoke on Trent City Council, said: “Predictably, Osborne had nothing to say about the relationship between the British Museum and regional museums—an area in which the prospects of ‘long-term partnerships’ seems to be receding. But then, as the architect of austerity, he is responsible for the immiseration of our local museums.”

The British Museum’s restitution policy has recently been the subject of popular interest after the US-based British comedian and broadcaster John Oliver dedicated an episode of his show Last Week Tonight to the ethical issues surrounding museums. Oliver described the British Museum as: “The world’s largest lost and found, with both ‘lost’ and ‘found’ in the heaviest possible quotation marks.”