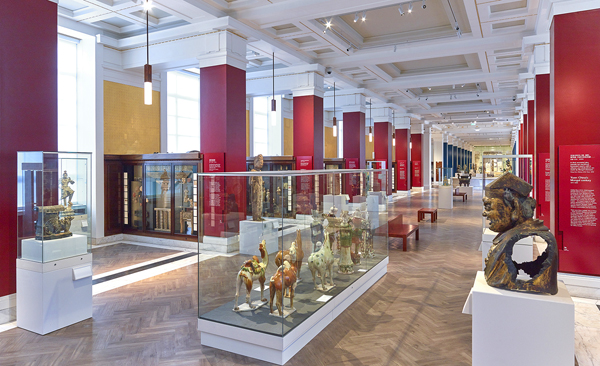 The Sir Joseph Hotung Gallery of China and South Asia at the British Museum has now reopened to the public after a major refurbishment.

Xinhua, Each culture has a possibility to see the world in a very specific way, British Museum director, China.org.cn, 22 March 2018

Every culture has its uniqueness. The challenge for the British Museum to be an encyclopedic one is to showcase not only the exclusiveness of cultures but the coherent inter-connectivity among them, said British Museum Director Hartwig Fischer.

“What we are looking at is the incredible diversity … And at the same time we look at that common ground, the shared humanity, and these two things need to be brought into light and have to be made accessible,” Fischer told Xinhua in a recent interview.

The British Museum has unveiled a 10-year and beyond transformation plan which includes bringing back its Reading Room and major refurbishment of galleries in a bid to take the museum to “the next level.”

“I think each culture has a possibility to see the world in a very specific way and one is not necessarily better than the other. It’s different,” Fischer said.

“What we have to do is rethink the display of our collection, to stress how cultures have grown into what they are … The China gallery is the first big step,” he said.

The China and South Asia Gallery is described by Fischer as the “most imposing room” in the British Museum. Built by King Edward VII in the early 20th century, the gallery distinguishes itself with its bold and noble features with gilding, strong pillars and plaster decorations.

As part of the Museum’s renovation project, the China gallery fully reopened to the public last December after a two-year refurbishment.

The museum has upgraded the floor, light and exhibition structure of the China gallery in a bid to better visibility and understanding for the museum’s 7 million annual visitors.

In addition to the iconic Ming dynasty blue-and-white porcelain and exquisite Tang dynasty tomb figurines, the gallery has also incorporated various rotating light-sensitive objects such as paintings, prints, and textiles to present Chinese history from 5,000 BC.

Notably, some of the modern artworks are on display for the first time in this gallery as the museum seeks to present a glimpse of present China.

“Nobody has ever enough to present the history of China. That is impossible. It is too vast, too varied. It’s too layered. So what we can do in such a place is to offer routes of access and confront you with the most stunning achievements,” Fischer said.

The China gallery, together with a separate gallery of Chinese ceramics, offers visitors many ways of engaging with China’s history and cultures, he said.

“And in that sense I think it is extremely rich,” he said.

The museum director said the efforts to incorporate modern art works into the historic display is to demonstrate “a huge and rich phenomena” in which present-day China relates to its past.

“Looking at the way present China relates to its past, you understand that culture is actually at the heart of resilience, the possibility to survive and to develop and to thrive,” he said.

The museum director described the museum world in China as “extremely dynamic,” as “it is looking not only on the great past but also the great future.”

The British Museum is working closely with the Chinese counterparts on joint projects and on the long-term basis in both Britain and China for study and exhibitions, said Fischer.

“The key is people meeting and people working together. There is always space to do more, to explore our collections, to explore history, to explore through the exhibition, through research projects,” he said.

The British Museum is “very keen” to share its exhibitions and collections with the Chinese audience, who are the biggest single foreign group visitors to the museum, said the director.

“It is our shared place. There are no ‘foreigners’ in this place. As soon as you cross the threshold, you’re a citizen of the world, you shared the same big one country.”

The British Museum has been working closely with Chinese colleagues for dual-exhibitions in China, said Fischer, noting that The History of the World in 100 Objects in Beijing and Shanghai attracted more than 700,000 visitors, and a major four-month exhibition in Hong Kong last year featuring mummies drew about 850,000 visitors — an all-time record for any touring exhibition of the British Museum.

“Behind it (the exhibition), there is in-depth, long-term cooperation in research, in skill sharing, in thinking about digital,” he said.

The director said there is much more to do in the future to intensify the exchanges. “I think that we have all profited very much on both sides from working together, from discussing, from sharing knowledge, from sharing skills.”

A FUTURE MUSEUM WITH DIGITAL TECHNOLOGY

Talking about digital technology, Fischer said the British Museum is fully bracing it to serve a global audience, especially those who cannot be online.

“The museum itself is a technology,” said Fischer. “And it has developed as it has to if it wants to survive.”

“I think the museum should use new means, those that are being developed to tell stories in a more pertinent way, in a richer way.”

The British Museum remains one of the leading visitor attractions in Britain, and an increasing number of people from around the world are engaging with the museum’s online collections.

“The British Museum has been very active in developing digital offers for its global audiences … we have 40 to 50 million people using our website and using online collection to engage with objects from the British Museum, so that gives you an idea of where we are heading,” he said.

The director said digital technology opens up a “fantastic new dimension” for the museum’s ambition to allow people around the world to engage with its collections and the history of humankind.

“It helps us to make our visitors understand that behind each of every object in this space, the human beings, the human feelings, and ambitions and hopes for spiritual enlightenment. And that is what this new technique allows us to do.”

Meanwhile, digital technology will also impact how people engage with the objects on site, said Fischer, noting that the museum is cooperating with tech companies like Google to explore new formats and methods and develop extra texts, explanations and images that help on-site visitors understand the objects.

Despite the advancement of technologies, the dialogue with the objects on site is always the best experience, said Fischer.

“That is a fantastic moment of self-assertion, freedom, respect, exploration, and discovery,” he said.