You are here: Home » Articles filed under: 'News' » Article: 'BM pledges ‘not to dismantle’ Parthenon'

BM pledges ‘not to dismantle’ Parthenon

December 9th, 2022 | Browse other: News. | Tagged with: BM pledges 'not to dismantle' Parthenon sculptures amid reports of talks with Greece, British Museum | 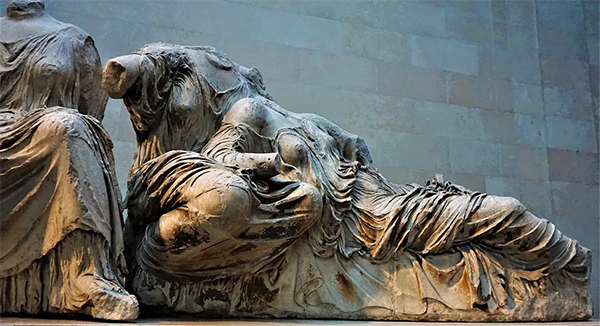 The Parthenon Sculptures in the Duveen Gallery at London’s British Museum. Photo: Joyofmuseums.

If a deal is finalised, the contested sculptures are expected to be returned to Greece in early 2023, and will be displayed at the Acropolis Museum in Athens.

After more than 200 years at the British Museum, the Parthenon Marbles may soon return home to Greece, a move which would resolve one of the long-running disputes in the global museum sector.

George Osborne, the chair of the British Museum, met with Kyriakos Mitsotakis, the Greek prime minister, in London last week, with the fate of the 2,500-year-old Parthenon marble sculptures reportedly the only item on the agenda. Osborne and Mitsotakis then gave an address at the London School of Economics, during which Kyriakoss said that the permanent return of the marbles was “possible”.

Kyriakos said: “A win-win solution can be found that will result in the reunification of the Parthenon sculptures in Greece, while at the same time taking into account concerns that the British Museum may have.”

The negotiations were the latest in a series of secret discussions that have taken place over a period of months between Osborne and the British Museum and ministers serving in Mitsotakis’ administration, according to Ta Nea, the Athens newspaper which broke the news. Sources told Ta Nea that the negotiations are now “at an advanced stage”.

If the deal is finalised, the marbles are expected to be returned to Greece in early 2023, and will be displayed at the Acropolis Museum alongside other artefacts from the Parthenon. Previously, the British Museum was in negotiations to lend the marbles to the new Acropolis Museum in Athens for a period of 10 years.

The Parthenon Marbles, also known as the Elgin Marbles, were taken from the Parthenon in Athens by the British diplomat and ambassador to the Ottoman Empire, Thomas Bruce, 7th Earl of Elgin, in 1801. Elgin took the marbles to the UK with the permission of the Ottoman authorities who controlled Athens at the time. The marbles were then sold to the trustees of the British Museum in 1816.

The Greek government have since argued that this permission was not valid and that the marbles were taken without the consent of the Greek people. This has been disputed by the British government; in March 2021, the then Prime Minister Boris Johnson stated that the Parthenon Marbles “were legally acquired by Lord Elgin under the appropriate laws of the time”.

Supporters of the marbles’ return to Greece argue that the British Museum does not have the proper conditions to appropriately care for and preserve the marbles, which could be damaged by exposure to light, moisture and other environmental factors.

The British Museum has been plagued by construction issues in recent years and is scheduled to soon undergo a significant restoration. But advocates for the marbles’ transfer back to Greece believe they will be better protected and preserved in the new and custom-built Acropolis Museum in Athens.

For almost 40 years, the marbles have been the subject of a contentious dispute between the governments of the Greek and British people. The Greek government first made a formal request for the return of the sculptures in 1983.

If the marbles are returned to Athens, it would constitute as something of a volte-face for the former British Chancellor of the Exchequer, who used a speech at the British Museum’s annual trustees dinner on 2 November 2022 to advocate a ‘retain and explain’ position on the broad issue of restitution.

While saying that “long-term partnerships could be struck,” Osborne appeared to deny the prospect of the Parthenon Marbles or other artefacts the British Museum acquired during colonial rule being restituted to their original place of provenance.

Osborne said: ”We hear the voices calling for restitution. But creating this global British Museum was the dedicated work of many generations. Dismantling it must not become the careless act of a single generation.”

In response to a request for comment, a British Museum spokesperson said: “The British Museum has publicly called for a new Parthenon Partnership with Greece and we’ll talk to anyone, including the Greek government, about how to take that forward. As the Chair of Trustees said last month, we operate within the law and we’re not going to dismantle our great collection as it tells a unique story of our common humanity. But we are seeking new positive, long term partnerships with countries and communities around the world, and that of course includes Greece.”

The reported arrangement with the Greek government may be blocked by the UK government, though. A spokesperson for No. 10 Downing Street, speaking on behalf of the Prime Minister Rishi Sunak, told reporters on 5 December that the UK government “had no plans” to amend the British Museum Act, which passed through parliament in 1963.

The act, an update of previous legislation passed in 1902, prevents a UK museum from selling or giving away items from its collection except in very limited conditions which relate to the condition and usage of the materials. Those conditions are not yet met for the proposed restitution of the Parthenon Marbles to Greece. The Act has stood without precedent. In May 2005, a judge of the High Court of England and Wales ruled that Nazi-looted Old Master artworks held at the British Museum could not be returned to the descendants of their original owners.

“Our position on this hasn’t changed,” Sunak’s spokesperson added. “Decisions relating to the care and management of the collections are a matter for the museum and its trustees. The Parthenon sculptures are legally owned by the trustees and operationally independent of the government.”

Sunak’s stance on the issue is consistent with that of former prime ministers Boris Johnson and Liz Truss, both of whom went on record to say they believed the Parthenon Marbles should remain in the possession of the British public. As recently as 2 November, Osborne said at the British Museum’s annual trustees dinner that “the law prevents” the restitution of artefacts like the Parthenon Marbles.

In response, a British Museum Spokesperson said: “The British Museum understands and recognises the significance of the issues surrounding the return of objects, and works with communities, colleagues and museums across the globe to share the collection as widely as possible.

“The British Museum Act of 1963 is the codification of the Museum’s founding responsibility to care for the collection on behalf of the world. The debate about restitution raises important and nuanced questions around objects and collections which are looked after in many countries around the world. The British Museum fully acknowledges the complex histories of objects within the collection and recognises our responsibility to engage audiences about their interconnected history in the modern world.”

See also: British Museum pledges ‘not to dismantle’ Parthenon sculptures amid reports of talks with Greece