You are here: Home » Articles filed under: 'News' » Article: 'BM protests by ‘BP or not BP?’ continue'

BM protests by ‘BP or not BP?’ continue

February 21st, 2019 | Browse other: News. | Tagged with: 350 Anti-Oil Protestors Take Over British Museum, BP or not BP?, I am Ashburnipal exhibition | 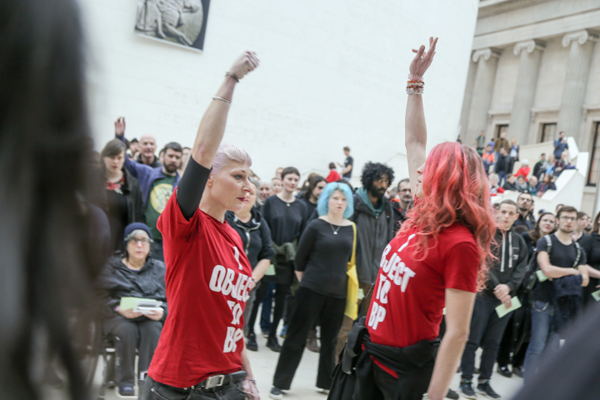 On February 16, for a protest organized by BP or not BP?, over 350 activists gathered to urge the British Museum to cut financial ties with British oil company BP.

For over two hours on Saturday, February 16, around 350 activists wearing all-black occupied the British Museum for a massive protest. Organized by campaign group BP or not BP?, they were protesting the final week of the popular exhibition I am Ashburnipal, king of the world, king of Assyria, which contains many treasured objects from the region that is now called Iraq. The British oil and gas company BP is the main sponsor of the exhibition, although the museum also charges a ticket fee of £17 (~$22).

The demonstration started with hundreds of protestors massed inside the British Museum’s iconic Great Court, facing visitors. They chanted slogans like “No war, no warming” and “Drop BP.” They handed out flyers and talked with visitors about the purposes of the protest, and they frequently sang this haunting refrain:

The activists proceeded to fan out around the exterior Reading Room, unfurling a long series of banners that had to be smuggled into the museum, which wrapped around the full space, measuring over 200 meters in total.

After rolling out the banners during the protest, the activists then moved into one corner of the Great Court, sitting and chanting. Eventually, they filed out to stand outside the main entrance. To the assembled protesters, activist Ilaf Moslawy, who was dressed as a BP official, read a poem she’d written from that fictional viewpoint. One refrain reads:

I am BP
What I represent goes beyond me
Government, museum, petroleum
What does it mean to be British?
Stolen land, stolen culture, stolen climate…

Moslawy was born in Iraq and has lived in the UK for 10 years, after her family sought asylum in The Netherlands. She doesn’t believe that most Brits are aware of the full extent of the country’s involvement in Iraqi conflict. Speaking with Hyperallergic after the protest, she said: “Your taxes are paying towards wars all over the world, and they’re killing people in Iraq even today. And your government has allowed people to exploit Iraqis.”

Saturday’s event was not BP or not BP?’s first protest of the Ashburnipalexhibition. In November, activists dressed up as BP employees and drank fake oil from champagne flutes to protest the oil giant’s exploitation of natural resources in Iraq.

BP or not BP? campaigner Nicki Carter told Hyperallergic that smaller protest was intended as a precursor to Saturday’s main protest. She says they wanted to do something big to roughly coincide with the 16th anniversary of the massive protests against the Iraq War. That 2003 demonstration was called the largest peace rally in British history, and Saturday’s protest was the largest to ever target the British Museum.

The protest was accompanied by a few satellite events. BP or not BP? has curated a rival exhibition at the P21 Gallery, near the British Museum. Running until March 2, this alternative exhibition of Iraqi artists is called I am British Petroleum: king of exploitation, king of justice. And prior to Saturday’s main demonstration, some of the BP or not BP? activists circulated through the British Museum’s Enlightenment Gallery, quizzing visitors about the origins of the artifacts.

Carter explained that this round of protests was intended to gather different activism concerns: environmental campaigners opposed to the expansion of fossil fuels; arts funding activists who want major institutions to reject unsavory corporate money; and Iraqi groups troubled by British contributions to conflict in Iraq.