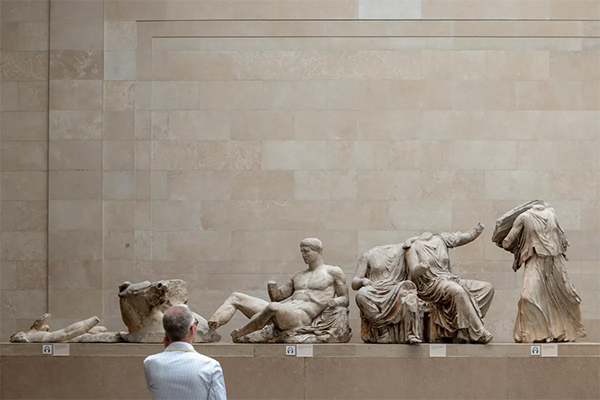 The Parthenon marbles at the British Museum.Photo: Brian Jeffery Beggerly.

The decision to prioritise the revamp of the museum’s Greek and Assyrian displays comes amid escalating calls for the permanent return of the Parthenon sculptures to Athens.

The British Museum is to prioritise the refurbishment of its dilapidated Greek and Assyrian galleries as part of its ongoing Rosetta Project, an ambitious plan to modernise its infrastructure and redisplay its entire collections. A masterplan for the revamp was agreed by trustees last month.

A museum spokesperson declined to say when the renovation of the Greek and Assyrian galleries is expected to begin and end, what its projected cost is and, crucially, where the Parthenon Marbles will go while the work is underway.

The chairman of the British Museum’s board of trustees, the UK’s former chancellor George Osborne, is now attempting to raise a staggering £1bn to finance the Rosetta Project, making it the most expensive museum revamp in British history.

Although the entire museum will be overhauled, no area of the building requires attention more urgently than its Western block, the oldest part of the museum, which houses Greek and Roman art, Assyrian sculptures, and part of the Egyptian collection.

Its shoddy conditions have fuelled calls for the permanent return of the Parthenon Marbles to Athens for display in the state-of-the-art Acropolis Museum, which opened in 2009.

Several galleries in this part of the museum have closed to the public repeatedly in recent years because of leaky roofs and crumbling infrastructure. Fans to increase air circulation have been positioned throughout the Western block for the last year. 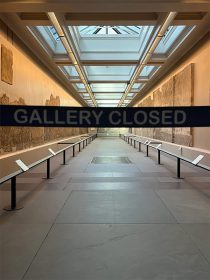 On 28 October, all the Assyrian galleries were closed to the public. A museum employee told The Art Newspaper that “they are rarely open” Photo: © Cristina Ruiz

On a visit last November, we found that one Assyrian antiquity was covered in plastic to protect it from water dripping from above and we also noted that the Parthenon sculptures had remained off view for an entire year, first because of the pandemic, and then, because of a leaking roof in an adjacent gallery.

At a meeting of trustees the following month, the decision was taken to prioritise the revamp of the Greek and Assyrian galleries. “Following a full discussion, the board agreed that the Western galleries should be the priority for the next phase of the Rosetta project,” according to the minutes of the December 2021 meeting. Three weeks ago the trustees agreed a master plan, the details of which will be announced in Spring 2023.

Overhauling the Western galleries will most likely lead to their closure for several years; all works of art will need to be moved to storage, displayed elsewhere in the museum or sent on loan to other institutions. This may help explain conciliatory statements made recently by museum chair George Osborne with regards to displaying the Parthenon Marbles in Greece. On 14 June, Osborne said in a radio interview that “there was a deal to be done” over sharing the Parthenon Marbles with Greece.

A British Museum spokesperson declined to confirm whether trustees are now seeking to arrange a loan of the fifth-century BC sculptures to Athens while renovation work is underway on the Greek galleries in London. However, in an important speech at the British Museum’s trustees annual dinner last night, Osborne addressed the restitution issue head on: there will be no dismantling of the museum’s collections “because we believe in a museum of common humanity”, he said. But maintaining the status quo, he added, was not good enough either: “There are partnerships we can strike. If you are willing to find common ground with us, we will fine common ground with you.”

But there is little common ground as far as the Parthenon marbles are concerned. The Greeks have said repeatedly that they would reject a loan of the sculptures and have called instead for the permanent return of the Parthenon Marbles to Athens. 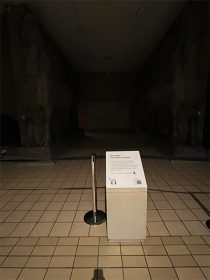 On 14 October, the gallery displaying sculptures from the city and palace of Khorsabad, built for the Assyrian king Sargon II (721-705 BC), was closed to the public and in complete darkness Photo: © Cristina Ruiz.

Although the fate of the Parthenon Marbles is one of the most politically-charged debates confronting British Museum trustees, an arguably more urgent challenge is fixing the display of the museum’s outstanding collection of Assyrian antiquities that is currently housed in shamefully run-down galleries with cracked tiles, leaking roofs, and antiquated infrastructure.

The collection has rarely been accessible to the public in its entirety in recent years. Every time The Art Newspaper has visited in the last three years, we have found one or more of the Assyrian galleries closed.

Most recently, we visited the Western block on 14 October and, then again, on 28 October. On both occasions, several of the Assyrian galleries were closed to the public. A museum employee working on the information desk told us that “those galleries are rarely all open” but could not say why.

When asked by The Art Newspaper when all the Assyrian galleries were last open continuously for an entire month, the museum did not respond.