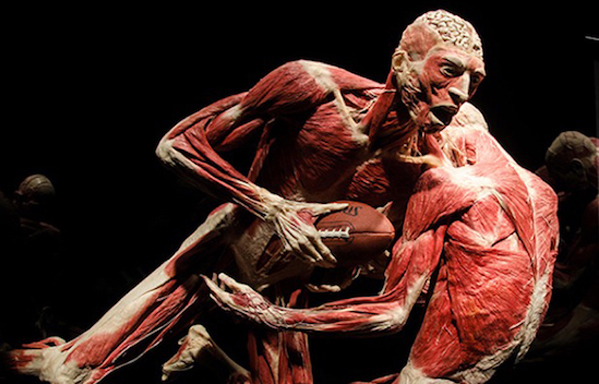 Is this exhibition dead wrong, or ethically considered? Melbourne exhibition of real bodies offers a lesson in science and wellbeing from the inventor of plastination, Gunther von Hagen.

Opinions are widely divided when it comes to exhibiting cadavers. In some countries, this kind of exhibition has been greeted with protest while in others, they have been celebrated as a breakthrough in how we educate people about the human body.

The stickler causing concern is one over the question of ethics in the use of human bodies, and more specifically, how those bodies have been sourced.

We are talking about the exhibition BODYWORLDS Vital – not to be confused with Real Bodies presented in Sydney in April 2018, which purportedly used the bodies of unidentified Chinese dissidents.

This claim has been emphatically denied by the publicist for Real Bodies, Bruce Pollack AM, who notes: ‘The specimens featured in Real Bodies The Exhibition were donated legally, were never prisoners of any kind, showed no signs of trauma or injury, are free of infectious disease, and died of natural causes. They have been examined by medical professionals around the world – and no one has ever found evidence otherwise. Additionally, the program that Dalian Hoffen Bio-Technique Co. Ltd – one of the world’s leading centres of plastination research and innovation and Imagine Exhibitions’ partner for Real Bodies The Exhibition – uses to source the bodies for plastination is absolutely an “established body donation program” that follows all legal protocol.’

BODYWORLDS Vital is the original human anatomy exhibit, drawn from an established body donation program, and coming direct from the Institute of Plastination, home to the inventor of this revolutionary research, Dr. Gunther von Hagen.

This is the first time the exhibition has come to Australia.

BODYWORLDS Vital has been presented in 31 countries before Australia, and has been viewed by more than 46 million people to date. By all measures, that would be the indication of a successful blockbuster exhibition.

ArtsHub caught up with Dr Angelina Whalley, curator of the BODYWORLDS Vital exhibition, who said, ‘Our aim with this exhibition has always been to engage visitors with the opportunity to take away thought about their own health and wellbeing. If people walk away with that then we are thrilled with that result.’

Comprised of 150 ‘specimens’, Whalley confirmed that all the bodies in the exhibition have been donated by consent.

Whalley told ArtsHub: ‘Our Institute is founded based on the notion that informed consent of individuals who are on display is necessary. BODYWORLDS and the Institute for Plastination feel that using the remains of individuals without consent is not ethical.’

The Institute states: ‘They belonged to people who declared during their lifetime that their body should be made available after their deaths for the qualification of physicians and the instruction of lay people, in the BODYWORLDS exhibitions.

‘Many donors emphasise that by donating their body, they can be useful to others even after their death. Their selfless donations allow us to gain unique insights into the human body, which have thus far been reserved for physicians,’ explained Whalley.

Von Hagen and Whalley describe the exhibition as a ‘collaboration – a joint quest towards enlightenment between donor, anatomist and visitor.’

Whalley added definitively: ‘The exhibition is intended as an educational exhibition.’ In New Zealand, of the 80,000 who attended, 12,000 were children.

She said that, to date, they have had an overwhelmingly positive response in Australia to the exhibition’s tour announcement, and that tour pre-bookings by Victorian school tours, families and the general public has been very pleasing.

Whalley said: ‘Dr. von Hagens has a strong following in Australia with many commenting on a TV series that aired on SBS TV called Anatomy for Beginners. The focus on human health and well-being is very strong in Australia.’

While this television program may have assisted in promoting an interest in the exhibition and Dr von Hagens’ work, Whalley said that Plastination was invented in 1977, well before programs like CSI became popular.

‘Before BODYWORLDS, there were hardly any current, popular scientific books or TV programs on the human body. Today, the markets are flooded. Also, we’ve noticed that the subject matter in popular culture became more of a combination of education and entertainment. If you look at older popular scientific books all anatomical drawings show rather stiff and upright bodies. But today, almost all show lifelike posed bodies, similar to what is seen in BODYWORLDS. The exhibitions themselves however, were inspired by the Renaissance period when artists studied anatomy,’ said Whalley.

She continued: ‘Early on we found that people feel more comfortable if the whole body specimens are posed in relatable positions [in the exhibition]. We do not present the human body as gory, but rather as a beautiful vessel that all of us have only one of, to experience our lives.’

Initially plastination was intended for medical students and study.  A whole body plastinate requires approximately 1,500 working hours, or a year, to complete. The process of Plastination replaces the natural fluids in the body with reactive plastics that are initially pliable, and then harden after being cured by light, heat or gas. By hardening the plastic in the specimens, they may be permanently preserved in life-like poses.

She added that the exhibition welcomes visitors of all ages. ‘Our website offers some educational tools to help parents and educators prepare for their visit,’ Whalley added.