You are here: Home » Articles filed under: 'News' » Article: 'BP or not BP protests continue'

BP or not BP protests continue 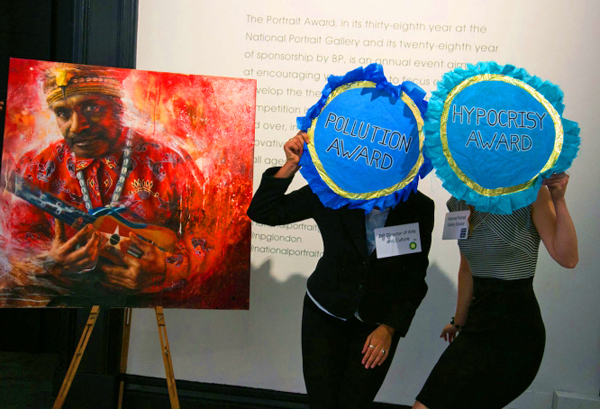 BP or not BP? stage an intervention at the National Portrait Gallery in protest against the oil company BP’s sponsorship of the annual portrait award. BP also has extensive oil and mineral interests in West Papua. The painting is by Dale Grimshaw of Benny Wenda. Photo: Kristian Buus, courtesy BP nor not BP?.

On Thursday evening at the National Portrait Gallery, protesters drew attention to BP’s work with the Indonesian government, which has been accused of civil rights violations in West Papua.

LONDON — The National Portrait Gallery’s annual portrait prize exhibition gained an extra exhibit last night thanks to an intervention by BP or Not BP?, an anti-British Petroleum (BP) artist protest group. The BP Portrait Prize is an annual public competition that has run for 37 years and has been sponsored by BP since 1990. The protest was one of many staged events against BP’s involvement in the arts in recent years by BP or not BP? and other members of the Art Not Oil Coalition.

In the hall just outside the exhibition space, BP or not BP? unveiled a portrait of Benny Wenda, a West Papuan independence leader exiled in the UK. Wenda is the face of a struggle that protesters claim has been ignored by BP.

According to a statement given by Wenda, “BP is operating in the middle of a genocide. Since 1963, hundreds of thousands of West Papuans have been killed by the Indonesian occupation, either directly by government forces or through the loss of their homes, their lands and their livelihoods. The money that BP pays to the Indonesian government helps them to buy weapons and ammunition that are used to harass, intimidate and kill my people.”

The portrait was displayed next to the “morning star” flag, used by West Papuan independence supporters but which is banned by Indonesia.

Dale Grimshaw, the painter of the portrait, had submitted his painting of Benny Wenda to the competition as a form of protest, but it was not selected. He explained his decision to protest the exhibition in an impromptu talk to gallery-goers. He said: “[BP] know very well what’s going on in the land, they engage politically and financially speaking with the Indonesian military … could you imagine, on a weekly basis, people you know being imprisoned and tortured for peaceful protest?”

He also said in a statement: “BP gets to plaster its logo all over the gallery and present this false version of itself to the world. Art can be a way to fight back against that and tell the truth about what these companies are really doing.”

The intervention was timed to happen on the same day as the submission to the UN of a 140,000-strong international petition calling for a free and fair independence vote for the people of West Papua.

After the portrait was unveiled, the group screened a short video of Wenda and performed a mini “awards ceremony” presenting prizes for “biggest hypocrite” and “biggest polluter” to the “Director of the National Portrait Gallery” and a “BP representative” respectively.

The charge of hypocrisy stems from the National Portrait Gallery’s Ethical Fundraising Policy, released via a Freedom of Information request made by Culture Unstained, which states concern over accepting funds from anyone “known or suspected to be closely associated with a regime known or suspected to be in violation of human rights.”