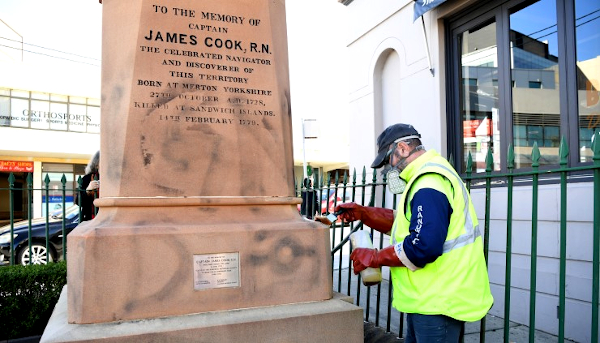 Christopher Warren, The Murdoch media is in a moral panic about the one cultural war it didn’t start, Crikey, 16 June 2020

News Corp (and some of its traditional rivals) is in a tailspin over recent anti-racist protests. Once again, old media is showing its age.

“Something is happening, but you don’t know what it is, do you, Mr Jones?” Nobel laureate Bob Dylan warned journalists half a century ago in “Ballad of a Thin Man”.

This past week’s carry-on — from Gone with the Wind to the Cook statues and on to Basil Fawlty — is best understood as that sudden moment when all the Mr Jones in Australia’s media discovered that somehow a major cultural reset has been going on without them.

It’s not unusual for journalism to be slow to keep up with Australia’s changing understanding of itself. Historically that understanding travels on a long, imperfect arc through music, academic research, feature film, books, even advertising and television, long before it lands on the news desks to be integrated into daily journalistic practice.

Australian journalism is slower than most, in part due to its lack of internal diversity and in part to its cultural domination by News Corp. Political leaders from John Howard on have contributed too, by bullying journalists to join them in the culture war galleys to beat against the current, borne ceaselessly into the past.

This past week it resulted in an outpouring of moral panic about the slippery slope of anti-racist overreach, with column after column warning that we are, suddenly, one hand-written protest sign or defaced statute away from an inevitable descent into the modern chaos of a global cultural revolution.

Sailing in a mish-mash of hysterical metaphors and historical hyperbole, the tides of op-eds carry Australia’s media opinionistas across the oceans of global debate, mapping what The Australian’s 2000-word editorial described as “a brazen attempt to overthrow what we value in liberal democracy by those who slander it as a system of minority oppression and impoverishment”.

“Gone with the whinge” shrieked The Daily Telegraph on Friday over the decision by HBO Max to temporarily withhold Gone with the Wind to add historical context. “Woke mobs rise up in war on the west”, shouted The Australian’s Inquirer in a “will no one think of the statues?” plea — just the opening of almost seven broadsheet pages for a weekend’s read about the resistance to the current moment of cultural reset. (Makes you wish for the days when ads provided a bit of a breather.)

On Friday you could feel the frisson running through the media at the discovery that an episode of Fawlty Towers had been temporarily taken down by a UK streaming service, not dampened by the fact that the take-down was to bring it into line with the agreed 2013 editing already applied in Australia.

By Sunday the same media that had been so busy with their egg-beater were tut-tutting about the culture war taking focus away from Indigenous disadvantage.

The result of that beating was that the act of a streaming service temporarily withholding an otherwise widely available film from its platform became something like Nazi book-burning.

A broader lens suggests that providing context to otherwise rose-tinted portrayals of slavery-like Gone with the Wind — or the public theatre of protesters pulling down a statue of slave trader Edward Colston and dumping it in a river — are the sort of debate that everyone claims to want.

Instead, Australia risks being locked out of the robust interchange around racism and the legacy of colonialism that is seeing a reset in the world’s cultural understanding. On Sunday The Australian’s political correspondent used Insiders to gloss over a distinction between “blackbirding” and slavery, while a News Corp tabloid op-ed argued (in the 21st century!) that Indigenous (and African-American) disadvantage was really their own fault.

Meanwhile, in the Liberal party room, federal Treasurer Josh Frydenberg prioritised the need to refute claims of Churchill’s racism. (Maybe he should check with Bengali Australians, although Churchill wasn’t even that keen on white Australians — “bad stock” apparently.)

At the same time, new media are showing better ways of reporting. Junkee exposed Insiders diversity problem, while both The Guardian and the long-diverse SBS rebutted Morrison’s gaffe that there was no slavery in Australia’s history.

Sunday’s Insiders demonstrated how diversity brings better journalism at the same time as it showed the flaws in the ABC’s affirmative action for News Corp.

It shows that if journalists want to know what’s happening, they need to get out in front of Mr Jones.