You are here: Home » Articles filed under: 'News' » Article: 'Brazilian National Museum after the fire'

Brazilian National Museum after the fire 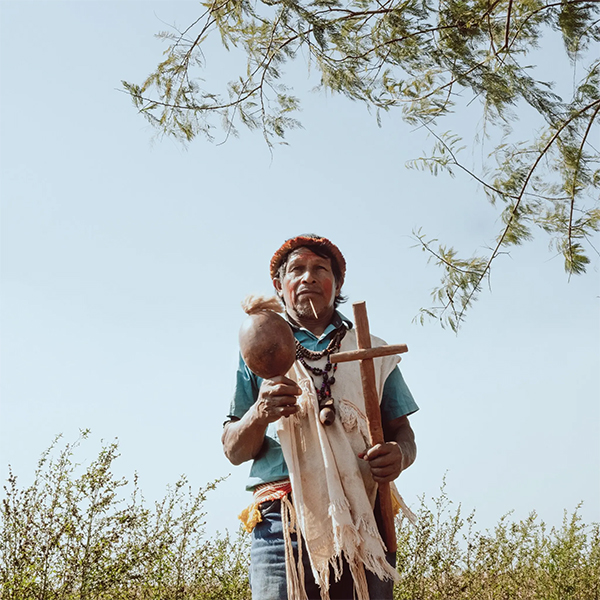 After a fire destroyed thousands of Indigenous artifacts, the curators of this Brazilian museum are adopting a radical new approach.

On the evening of Sunday, Sept. 2, 2018, the National Museum of Brazil in Rio de Janeiro was closed, and its hallways were empty. Silent activity, however, coursed within its walls. Electricity hummed through wires connected to computers; climate-controlled storage and three air-conditioning units connected, improperly, to a single circuit breaker in the ground-floor auditorium. When one unit most likely received a surge of electricity it couldn’t handle, the overburdened system sparked. The museum’s smoke-detector system was not set. There were no sprinklers or fire doors, and a flame bloomed. Seeing the news, staff members rushed to the building and pleaded with firefighters to let them enter and rescue something — anything. Within hours, the entire neoclassical colossus built in the early 1800s was ablaze.

Errors — some so small they were hardly noticed, others unforgivably avoidable — led to a conflagration that destroyed Latin America’s most renowned natural-history museum and most of its 20 million artifacts. Much of what was lost or severely damaged was irreplaceable: the mummy of an Ancient Egyptian priestess, a 110-million-year-old fossilized turtle, a vast collection of butterflies, the oldest known human remains in Latin America.

The fire also obliterated an enormous assemblage of artifacts representing the cultural history of Brazil’s Indigenous populations. Masks, vases, weapons, mortars and elaborately feathered ceremonial capes dating back at least a century from the Ticuna, the Kadiwéu, the Bororo, the Tukano — at least 130 peoples in all — were gone. Researchers worked to salvage what they could from the ashes. Astonishingly, a few ceramic vases kept their original paint. One Karajá animal sculpture was found almost intact. But most “were fragments, scraps that would no longer be recognized by the people who made them,” says João Pacheco de Oliveira, the head of the museum’s ethnology and ethnography division. When Ananda Machado, a social historian at the Federal University of Roraima, told members of the Wapichana people about the fire, they were devastated. “To them, these objects were much more than material,” she said; they carried with them the strength of the people who made them. The fire, Oliveira wrote, was a “holocaust of a national memory.”

In 2018, after 40 years with the museum, Oliveira planned to retire. But the fire pushed those plans aside. Even while mourning the tragedy, he saw possibility. Yes, the ethnographic collection was in some ways unparalleled, but he had long been vexed by what was missing from it. Many objects were collected by European travelers in the 19th and early 20th centuries who didn’t grasp the purpose that the objects served. A pot or a cape might have been chosen simply because it seemed beautiful or peculiar to a Western eye. As a curator, he found this lack of cultural context deeply frustrating.

As an anthropologist, Oliveira was even more troubled. Since the 1970s, he has spent long periods with the Ticuna in northern Brazil trying to understand them on their own terms and to communicate their culture to a wider world. The museum was an important vehicle for his aims, but the institution came with its own inglorious history. As with other 19th-century museums, the National Museum was a repository of items plucked, purchased or plundered from Indigenous communities and had presented the people themselves as curiosities, papier-mâché figures in dioramas alongside taxidermied animals. And sometimes worse. The biggest draw of an 1882 exhibition were living members of the Botocudo and Xerente tribes on display for the entertainment of visitors.

The fire incinerated the vestiges of that colonial history too. For Oliveira, the destruction was also a chance to start over and try something radical: asking Indigenous peoples what they wanted.

With no building to return to, Oliveira met with his team members on park benches and in cafes and explained his vision for a new collection. Indigenous people would be consulted not only about what items would go into the museum but also on how they should be identified, stored and exhibited. One of the first people he turned to was a former student named Tonico Benites.

Benites grew up in Mato Grosso do Sul in midwestern Brazil on a reserve for the Guarani-Kaiowá, one of the country’s 305 surviving Indigenous groups. His parents never learned to read and write, but he finished high school and went on to study for a degree in education, picking up work on the side as an interpreter for anthropologists. Drawn to the questions the researchers asked, he applied to a master’s program in social anthropology offered at the museum.

Benites’s first visit to the museum in 2006 was also his first day as a student there. Entering the ethnographic exhibition area, he saw a collection of spears and arrows and then rounded a corner. He froze, sickened. Covering an entire wall was an outsize reproduction of a woodcut from a 1557 book by the German explorer Hans Staden. The account of Staden’s captivity by the Tupinambá was immensely popular in its day, and some scholars now assert that its sensational depictions of cannibalism were used to justify European conquest of Indigenous peoples. “Right away, when you walked into the room,” Benites recalls, “you would see that image of Indigenous people eating and tearing others to pieces.” 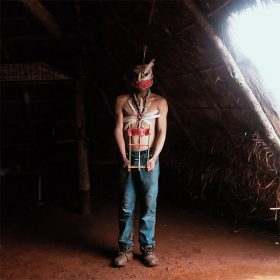 Jonatan Gomes in the prayer house in Guaiviry holding a xiru altar that he is donating to Brazil’s National Museum. Gomes, who is a member of the Guarani-Kaiowá, decided to keep the war mask he is wearing, which includes bone from a capybara spine. In 2011, Jonatan and his grandfather were among those attacked by a group of men said to have been hired by non-Indigenous farmers. Jonatan was wounded, but his grandfather, Nísio Gomes, died.Credit…Luisa Dörr for The New York Times.

Benites raised his concerns with Oliveira, who was his research adviser. Oliveira sympathized but suggested that Benites use his research to change people’s minds. The image was removed months later, but almost a decade would pass before Benites, who had just finished his anthropology Ph.D. — the first Indigenous person to do so at the museum — began research for what he hoped would be a Guarani-Kaiowá exhibition. The fire decimated his plans, but the work he had done and his unique perspective as a respected member of his community made him a natural choice for helping to rebuild the museum’s collection.

The absence of Indigenous perspectives in exhibitions about Indigenous people has been acknowledged, if rarely remedied, at natural-history museums. The American Museum of Natural History in New York City recently reopened its Northwest Coast Hall in collaboration with the 10 Indigenous communities represented. But even that ambitious effort was haunted by the past. Haa’yuups, head of the House of Takiishtakamlthat-h of the Huupa‘chesat-h First Nation, on Vancouver Island in Canada, who was appointed as the co-curator of the exhibition, provided context and wording for labels, among other things. But the objects themselves, he says, rightfully belong to the communities from which they were extracted years ago. “The things I want to do are almost in opposition to what they want to do,” he says. “I want to carry those treasures home. They want to keep them and exhibit them.” (The museum says it is exploring “limited repatriation.”)