Hartzer also appointed as a Trustee to AM Trust. 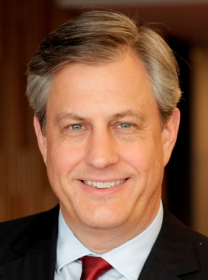 Mr Hartzer will assume his role as Chairman effective immediately, following AMF Chairman Diccon Loxton’s retirement, having served the AMF for over 13 years.

“I am honoured to be joining the Australian Museum Foundation as Chairman as well as the AM Trust as a Trustee at this exciting time in the AM’s history,” Brian Hartzer said.

“The Australian Museum is one of NSW’s most important cultural and scientific institutions, engaging the public on important issues like climate change, biodiversity, and First Nations cultures, as well as playing a critical education role. My family has enjoyed their experiences at the AM and I look forward to working with the AM team on its continued development,” Hartzer said.

The AM has recently undergone a $57.5m redevelopment, Project Discover which has attracted significant philanthropic support.

“It’s a great asset to have Brian’s capability and corporate experience on both the AM Trust and AM Foundation, creating greater integration between the two entities. Brian succeeds Diccon Loxton, who has helped increase our philanthropic efforts at the AM, helping realise our potential as a world-class institution,” Australian Museum Trust President David Armstrong said.

“Diccon has inspired many others to give to the Museum through his own philanthropic leadership gifts. It’s my great pleasure to announce Diccon as a Governor Emeritus and I’m pleased that he will continue to support the AM in the future,” Armstrong said. 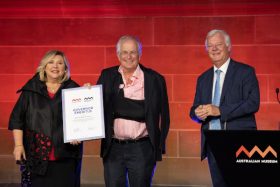 “Both the AM Trust and AM Foundation play important strategic leadership roles for the Museum. With the support of the AM Foundation, the AM has achieved its Project Discover fundraising goals. The Foundation has helped to almost double the $7m needed to complete our transformation, and we look forward to building on this momentum with Brian as our new AMF Chairman,” Australian Museum Director and CEO Kim McKay AO said.

The AMF was established in the mid-2000s by former AM Trust president Brian Sherman to ensure wider group of donors were involved in the Museum’s work. The AMF is a not-for-profit organisation that exists solely to raise funds to support projects across the AM, from science research and collections to cultural and education programs. The AMF has supported the important work of the AM with projects including:

About the Australian Museum

The Australian Museum (AM) was founded in 1827 and is the nation’s first museum. It is internationally recognised as a natural science and culture institution focused on Australia and the Pacific. As custodian of more than 21.9 million objects and specimens, the AM is uniquely positioned to provide a greater understanding of the region through its scientific research, exhibitions and public and education programs. Through the Australian Museum Research Institute (AMRI), the AM also plays a leading role in conserving Australia’s biodiversity through understanding the environmental impacts of climate change, potential security threats and invasive species.

Brian was Managing Director & Chief Executive Officer of Westpac from February 2015 to 2019, having joined Westpac as Chief Executive, Australian Financial Services in June 2012. Prior to joining Westpac, Brian spent three years in the UK as CEO for Retail, Wealth and Ulster Bank at the Royal Bank of Scotland Group. Prior to that, he spent ten years with Australia and New Zealand Banking Group Limited (ANZ) in Australia in a variety of roles, including his final role as CEO, Australia and Global Segment Lead for Retail and Wealth. Before joining ANZ, Brian spent ten years as a financial services consultant in New York, San Francisco and Melbourne. Brian graduated from Princeton University with a degree in European History and is a Chartered Financial Analyst.

David was appointed President of Trustees in January 2018 after appointment as a Trustee of the Australian Museum Trust in January 2014. David is a chartered accountant and non-executive Director of the National Australia Bank. He is a Director of the Opera Australia Capital Fund, the Museum’s Lizard Island Reef Research Foundation and Chairman of the George Institute for Global Health. David was a partner at PricewaterhouseCoopers (PwC) for 24 years, specialising in providing professional services for financial services organisations throughout his career and has lived and worked in London and New York. He has a BBus (UTS) and is a fellow of the Institute of Chartered Accountants in Australia.

Appointed as a Director of the Australian Museum Foundation (AMF) on 21 May 2007 and served as AMF Chairman 31 October 2007- 3 December 2020. Diccon Loxton is a Lawyer and Consultant at Allens Arthur Robinson, specialising in banking and finance. He is the immediate past president and a director of the Banking and Financial Services Law Association. Diccon lectures in the LLM Corporate Finance course at Sydney University and is also a Director of the Worldwide Fund for Nature Australia.

Former Westpac Banking Corporation boss Brian Hartzer is kicking off his corporate comeback and will become chairman of the Australian Museum Foundation.

Mr Hartzer will also become a trustee of the museum’s trust, which acts as the institution’s governing body.

“The Australian Museum is one of NSW’s most important cultural and scientific institutions,” Mr Hartzer said.

“I look forward to working with the AM team on its continued development.

“We want to make sure that we continue to be as relevant as we possibly can to Sydney, the state and Australia,” Mr Armstrong said.

He would be disappointed if there was blowback about the appointment of the former Westpac boss, but said Mr Hartzer will bring his passion and talent to the role.

Westpac paid the biggest fine in Australian corporate history, $1.3 billion, to settle the case brought against it by AUSTRAC, with the bank admitting to 23 million breaches of the law.