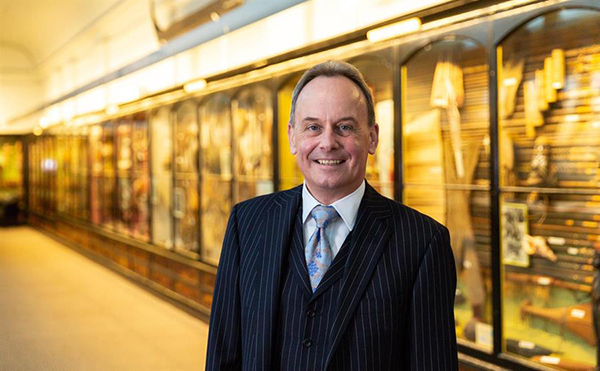 The South Australian Museum (SAM) sits proudly on North Terrace, Adelaide’s ‘cultural boulevard’, adjoined by the State Library on one side and the Art Gallery of South Australia on the other. This month, SAM turns 165 making it one of the world’s oldest museums. The state of South Australia had only been founded 20 years earlier. It is amongst the most visited museums in the country and is home to many collections of national and international significance.

As SAM celebrates this milestone with the Wonders exhibition, featuring 165 fascinating objects – most of which are on display for the first time – ArtsHub asked Museum Director Brian Oldman to reflect on the past and anticipate the future.

‘From fossils of the first known life on earth to pieces of Martian meteorites – there is something here for everyone to discover. We are the proud custodian of the world’s largest Australian Aboriginal cultural collection, housing some 30,000 objects, and the world’s most significant opal collection. This really is a world-class museum.’

‘A museum is not just for show; it’s also for research.’ Brian Oldman

He added: ‘We collect in perpetuity, so part of what we have to do is to conserve this great collection so it’s there for future generations.’

THE INTERSECTION OF CULTURE AND RESEARCH

As a leading public institution, the Museum has a dual role as a space for people to visit, seeking both education and recreation, and as a centre for scholarly research.

‘Some of our collections are research collections and not ones that can be put on show. [For example] we have the biggest collection of wild animal tissue in the southern hemisphere, stored in freezer cabinets in the basement of our science centre. That’s not something we could put on show, but it’s at the heart of our role. A museum is not just for show; it’s also for research.’

Interestingly, SAM is Australia’s leading research museum, attracting more Australian Research Council grants each year than any of the other museums.  ‘We also publish more academic papers than any other museum in Australia, so the quest for new knowledge is absolutely at the core of what we do,’ said Oldman.

One of the pieces in the Wonders exhibition is a meteorite that was found in Egypt in 1911.  ‘It had a lot of mystery to it that wasn’t really understood. It wasn’t until the 1980s that we  discovered it was from Mars, and so another chapter of its history was written some 75 years later after it came to us.’

MUSEUMS AS AGENTS FOR CHANGE

Museums and galleries have always been a place for stimulating debate, but they can also provide a space for contemplation and for reflection on our own place in the world.

‘People are much more questioning than they used to be, and the world is becoming increasingly bewildering. Museums have a unique place in society where we present information you can trust, and then allow you to form your own opinions in a more informed way. In that way, museums can be agents for change.’

Historically, museums were founded on the belief that sharing cultures enhances understanding and empathy, making them a force for good in the community.

At the same time, it is inescapable that museums have played a role in supporting the dominant cultural narratives that have exploited or overlooked other stories and other realities.

‘It’s always an invidious challenge to totally view actions that happened a long time ago through the lens of today. This is the dichotomy and the challenge that we have to live with.’

There is now a strong impetus for change in institutions internationally. Increasingly, this means Indigenous people and those of other cultures are active participants in crafting the narratives of exhibitions, helping museums to tell stories that are more considered, inclusive, and respectful.

This is a fundamental shift that underpins collecting and curatorial practices, and one that is vital if museums are to stay relevant into the future. And it goes beyond the museum walls with SAM taking a leading role in areas such as reconciliation and working with communities for the reintroduction of Aboriginal languages.

‘We always say that we are the custodians of those collections, but that the cultural owners are still the communities themselves. In many regards, the communities are very happy that we care for their cultural objects. And they come here often to connect with those objects. We can improve our knowledge by listening to them,’ Oldman told ArtsHub.

THE MUSEUM AND THE REPATRIATION OF OBJECTS

SAM has a long history of working with indigenous people to return objects to communities, especially secret and sacred objects that have a particular cultural significance, and ancestral remains.

‘This is a safe place for ancestral remains but we have no desire to keep them for any longer than is required. We have a very active policy of repatriation where those ancestral remains go back to the communities,’ explained Oldman.

There is also a strong commitment to Aboriginal employment at the museum.

‘We have to be open and honest about the history since contact, and sometimes that can be quite challenging, and we have to own our own history too. The way you do that is to talk about it and be open about it,’ said Oldman.

Even with the challenges around ownership, appropriation, and narratives, Oldman says museums are still trusted institutions.

‘Most often, we’re seen as a safe place and a lot of objects in our collection simply would not exist today if they hadn’t been looked after here,’ he added. ‘They come here and then people can have access to them and it becomes part of their understanding of the world.’

The digitisation of museum collections means objects that are not on show can still be viewed but that doesn’t replace the physical experience.

‘Of course, nothing compares to actually seeing the real object, but that’s the ultimate luxury. Digitisation is just part of a broader tapestry of engagement,’ Oldman said.

The funding for public museums is also a complex tapestry with the days of a government grant paying for everything being long gone.  ‘We are very much a mixed economy now and that is true for all major museums. The state government provides the money for about half our operation and the other half we have to make ourselves.’

As we chat in the Museum café, Oldman acknowledges the financial reality that money is the great enabler.  ‘I often say that we need to have the best scientific research but we also need to serve the best cup of coffee, and that’s the full spread of what we have to do.’

‘We have some very generous philanthropists and foundations, our corporate sponsors, and our own commercial activities, such as the shop, café, and functions,’ a money mix that blends old and new thinking.

These activities all contribute to the Museum’s involvement in the life of the city and the state.

‘We shouldn’t be a remote ivory tower. This is the people’s museum, and if that means we are much more rounded and connected with the community, then that’s a good thing.’

A very important aspect of being ‘the people’s museum’ is that it remains free to enter.

‘It’s actually enshrined in the South Australian Museum Act of 1976 that our galleries are freely open to the public and we only charge for added-value activities. School children are incredibly important, and we get forty thousand of them come through each year. Museums have an ability to flick that switch of enquiry and a thirst for knowledge, and that is really powerful.’

Oldman says discovering new knowledge is one of the things that makes museums so exciting.

‘The one thing we always know is that we never know it all. We really do have a unique role in society and the museum is a place you can visit for life.‘

‘We’ve been around for 165 years, and I’d like to think we’ll be around for much more than 165 years into the future,’ he concluded.