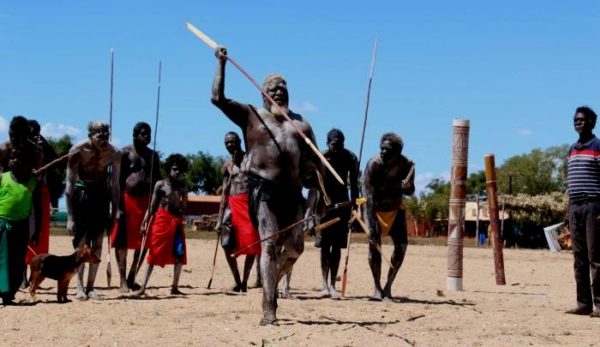 Yolngu warriors perform the ceremony on the outskirts of Milingimbi. Source: ABC News.

From the mangroves on the outskirts of the small Northern Territory island community of Milingimbi, the warriors of Makarrata emerged with spears in hand.

The ancient act, which would traditionally involve spearing to resolve disputes over murder, sorcery and the taking of women between clans, has not been performed in Milingimbi, 440 kilometres from Darwin, since the 1930s.

The Yolngu men and women painted their bodies with white mud to signify purity, while they performed the dispute resolution ceremony with curators from the nation’s top museums as well as some from the US and Switzerland.

Much of the knowledge has been lost about the thousands of Milingimbi artworks and artefacts held in these institutions and the ceremony’s aim was to build a bridge between the art world and the community.

“Makaratta is a law that was embedded in the roots of our law and culture,” said senior Djambarrpuyngu man, Lapulung Dhamarrandji.

“The linage of Makaratta is so strong that the law has been here before times and is empowered by senior people, our forefathers and the forefathers before them.