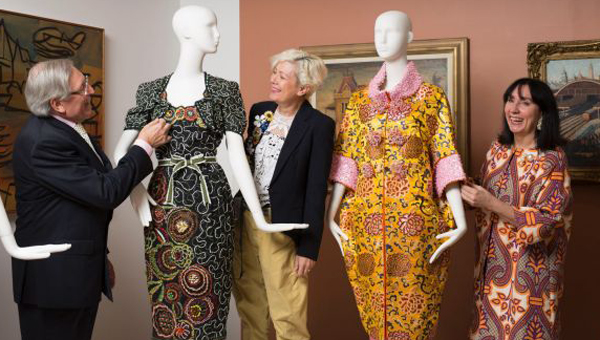 Dr Paul Eliadis, Lydia Pearson and Pamela Easton with part of Easton Pearson archive, which has all been donated to the Museum of Brisbane. Photo: Russell Shakespeare.

A self-taught pattern maker and a fashion buyer created a world-renowned clothing label in Brisbane 28 years ago. Now a philanthropist has donated the entire collection – about 3300 garments – to Museum of Brisbane and the hope is that it will inspire the next Easton Pearson.

“Brisbane for me I think was the natural home of the collection,” said the donor, Dr Paul Eliadis.

“It’s being conserved in the most appropriate way.

“The last thing I wanted to see was it broken up, and leave Australia. That would have been a crime.”

One half of the label, designer Pamela Easton said it was a “relief” that the Museum of Brisbane had decided to take the archive.

“It’s very satisfying to know that the whole collection will remain intact,” she said.

Thanks to the brand’s longevity, the collection is large – as well as the 3300 garments from almost every collection from 1990 to 2016, it includes lookbooks, runway videos and design sketches.

The label’s other half, Lydia Pearson said this had made it challenging to find an institution willing to accept such a large donation.

“You might think a donation’s free, so why wouldn’t you want it? But it costs a huge amount of money and it’s an enormous logistical exercise to accept 3000-odd garments and all of the books and ephemera that go with it,” she said.

While it’s a large archive, Museum of Brisbane director Renai Grace said she was thrilled to have it.

“It’s a transformational gift for us – our collection will expand by 60 per cent, so it is really significant,” she said.

“And it’s significant for the people of Brisbane that we’ll be able to hold onto this amazing archive.”

The Easton Pearson brand gained international renown in the 1990s for its bold, bright colours and intricate embellishments. The label was carried in high end department stores including Browns in London and Bergdof Goodman in New York, but kept a local base with boutiques in Sydney and Brisbane.

The complete archive was acquired from Pearson and Easton by Dr Eliadis, who said it was a critical part of Australia’s design history.

“I felt it was an archive that was incredibly important in terms of art and design, so the idea of just keeping it together was paramount – what to do with it after that was another question,” Dr Eliadis said.

“Ultimately, we realised that donating it to an appropriate institution was the right thing to do; to maximise it’s potential, to conserve it, and make sure it was never going to be broken up.”

Ms Grace said she was “thrilled” the whole “bright, colorful” collection was staying in Brisbane, where it had been designed.

“The archive really reflects I think the pattern and colour and vibrancy of Brisbane which is so hard to capture, and Pam and Lydia have just done it perfectly,” she said.

“When you look at a garment the details within it … each work is an artwork in itself, all the textures, the colours, the pattens, they really symbolise Brisbane.”

Easton said having the archive in Brisbane meant the designers could be “actively involved” in future exhibitions if the museum wanted.