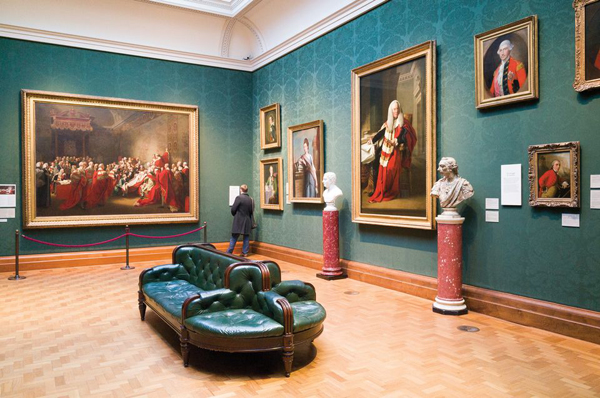 The National Portrait Gallery’s dramatic fall in visitor figures since early last year was the result of serious counting errors by an external company. The data, produced by Ipsos Retail Performance, “significantly undercounted visitors through the main entrance”, according to a spokeswoman for the gallery. The Art Newspaper can reveal that faulty equipment, which was then incorrectly monitored, was the cause of the errors.

The figures appear to show that visitor numbers have halved at London’s National Portrait Gallery (NPG) in the past three years. The company recorded that the gallery had 2.1 million visitors in 2015/16, 1.9 million in 2016/17 and 1.1 million in 2017/18. During the first three months of 2018/19 (April to June), the number plunged 28% on the same period last year. These figures have been damaging to the gallery’s reputation and have caused concern to its largest funder, the government’s department for culture.

It should be stressed that the gallery does appear to have suffered a fall in attendance, although the drop has not been as large as that shown in the Ipsos data. The neighbouring National Gallery has also faced a fall in visitor numbers.

The total number of visitors in 2017/18 was included in the NPG’s annual report and accounts, which was published by Parliament in July. The department for culture has been publishing monthly data, with the figure for June going online on 5 August.

We asked Ipsos whether it acknowledges that there has been a problem. A spokesman said: “The issue has been reviewed internally as a matter of urgency and a course of remedial action has been agreed with the gallery.”

The National Portrait Gallery first raised questions about a possible fault with the Ipsos system in March 2017, after the apparent fall had begun. The company then tested the accuracy of the automatic counting system at the main entrance, which is used by the vast majority of visitors who enter. (There is also a shop entrance, and at times, a side entrance is in operation.) The counting device uses a combination of technologies, including active infrared and optical sensors.

The test was conducted by comparing the automatic system with an accurate manual count. An automatic device was found to undercount visitors, so it failed the test. Inexplicably, Ipsos incorrectly informed the gallery that the equipment had “passed” the test. So, for more than a year, the faulty equipment remained in use and incorrect data was supplied to the government. A recent investigation into why the test was categorised as a pass rather than a failure found that “human error” within Ipsos was to blame.

The failure of the counting system eventually came to light in July this year, when the gallery discovered that the BP Portrait Award exhibition (until 23 September), which was subject to a manual count, was receiving more visitors than the automatic counters indicated for the entire gallery. Last year, the free BP exhibition attracted 234,604 visitors, and numbers for this year’s three-month show are slightly higher.

Tests are now being conducted using the original equipment, the new equipment and a manual count, to calculate revised figures for the period since early last year. These will then be submitted to the department for culture.

Meanwhile, the gallery has had to endure the negative publicity that followed press reports about the dramatic drop in visitors, impacting on its reputation. Falling visitor numbers may also make it more difficult to solicit sponsorship and donations.

This comes at a particularly delicate time, since the gallery has to raise a total of £35.5m for a major refurbishment, to be completed in 2022. The Heritage Lottery Fund has pledged £9.4m and a further £13.2m has been secured from private donors, Fundraising is on target, although £13m still needs to be raised.

The Art Newspaper asked the gallery if Ipsos would be providing financial compensation for the miscounting. The gallery was “unable” to comment, which suggests that it might be discussing the situation with the company and considering its legal position.

The gallery continues to use Ipsos Retail Performance, but it is unwilling to disclose when the current contract is due to end. Ipsos has been working for the gallery for 17 years.

Of the other major national art museums, the British Museum and the Victoria and Albert Museum use another company, Intelligent Counting. The Tate and the National Gallery do their own counting of visitors.

UPDATE: Following our exclusive report, the National Portrait Gallery released its updated visitor figures this afternoon (28 August). The new data shows that the gallery had 1,692,000 visitors in the financial year 2017/18, not the earlier reported 1,072,000. This represented a 10 per cent drop on the previous year, not the 43 per cent fall based on the original calculation. The new figure for the calendar year 2017 was 1,703,000, rather than the originally reported 1,272,000.

For the first three months of the current financial year, April to June 2018, the new figure is 327,000, compared to the original calculation of 197,000. The bottom line is that Ipsos very substantially undercounted the number of visitors. This new data is being submitted to the culture department.