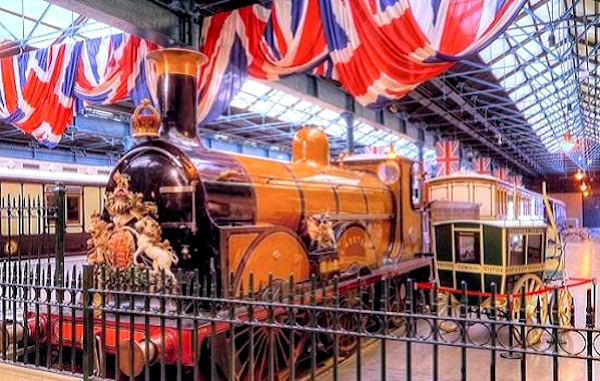 The National Railway Museum in York is one of the winners in the announcement, receiving £18.5m from the new fund. Photo: David Dixon (CC BY-SA 2.0).

The Government’s “biggest ever single investment in cultural infrastructure” will pay for building maintenance in musuems, technology for libraries and regeneration projects.

The fund comprises four separate allocations: £7m for Coventry and the UK City of Culture programme, £18.5m for York’s National Railway Museum, £90m to extend the Cultural Development Fund, and £125m for upgrades to museums and libraries.

While officials and beneficiaries have praised the boost, others in the sector have questioned its impact in the context of ongoing cuts to cultural institutions’ funding in recent years. An independent 2017 review found a real terms cut of £109m to museums’ funding over the preceding decade, and Arts Council England (ACE) reported a £236m decline in local authorities’ culture budgets between 2010 and 2016.

ACE will have “a key role” in managing bids for funding and distributing up to £50m each year until 2025, with DCMS retaining jurisdiction over the fund as a whole.

The bulk of the new fund is being directed towards “major infrastructure and maintenance work at local and regional museums” and capital and technology upgrades at public libraries.

The association’s comments follow an open letter it and other industry bodies penned last month warning that crumbling infrastructure presented a “quiet crisis” for institutions’ collections, estimating the repair bill at £200m. The MA said it will continue advocating for a similar level of investment in museums in Scotland, Wales and Northern Ireland.

“The disasters that have struck at the Glasgow School of Art, Notre Dame Cathedral and the National Museum of Brazil in the last two years have shown how fragile our precious museums buildings and collections are. We can only prevent similar disasters by investing in the upkeep of our buildings,” it said.

The Culture Investment Fund also includes a specific £18.5m allocation to redevelop the National Railway Museum in York. Director Judith McNicol said the funding provided “a springboard for unlocking our role as the cultural heartbeat of York Central, one of the most ambitious regeneration projects in Europe.”

The new funding will also extend the Cultural Development Fund (CDF), announced last year, for a further five years. Five areas – Grimsby, Thames Estuary, Plymouth, Wakefield and Worcester – received a share of £20m earlier this year in the first iteration of the fund. It is expected that another five places outside of London will benefit in each year of the fund’s extension.

The CDF is a product of the Creative Industries Sector Deal that “uses investment in heritage, culture and creativity to drive regeneration,” according to DCMS. A statement from Morgan highlighted the fund’s impact on the creative economy. She said: “this will help drive growth, rejuvenate high streets and attract tourists to our world class cultural attractions.” Tim Davie, co-Chair of the Creative Industries Council, echoed her words saying the investment will help develop “vibrant creative industry hubs across England”.