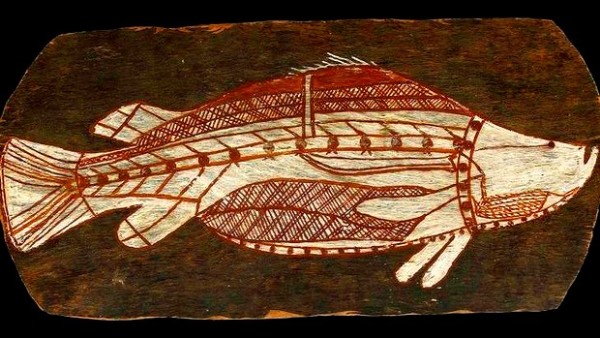 Bark painting of a barramundi, from Western Arnhem Land, circa 1961. Photo: The Trustees of the British Museum.

‘I can’t wait to get my hands on the jewellery, to touch it,’’ confides Henrietta Marrie. “I am very emotional about it.” A Yidinji woman from Cairns, Marrie is referring to century-old Aboriginal body ornaments held by the British Museum that closely resemble those worn by her great-grandfather, a tribal leader called ­Ye-i-nie, in a famous 1905 photograph. Earlier this month, Marrie clutched a copy of that photograph as she took a London cab to a down-at-heel suburb — all blackened bricks, bitumen and grim council housing towers — in the city’s east. Marrie, a member of the National Museum of Australia’s indigenous reference group, was heading to the British Museum’s stores.

Directly across from a public housing estate, the stores could hardly be more removed from the glamour and monumentalism of the ­museum, one of the world’s most visited cultural institutions, which houses the much-fought-over Elgin Marbles, the Rosetta Stone and enough Egyptian mummies to repopulate a dynasty. The stores, by contrast, are a byword for institutional sterility (scuffed floors, cracked walls, 1960s venetian blinds, endless gun-grey filing cabinets). In these almost aggressively utilitarian surrounds, Marrie comes face to face with tangible evidence of her people’s heritage — evidence that has often eluded her.

The Yidinji wife and mother, whose sunny, friendly manner masks a quiet determination, has been an outspoken heritage activist for decades, advocating for better access to indigenous family histories and artefacts held by state, national and overseas museums and galleries. Yet only in recent years did she realise the British Museum held shields and the same sort of jewellery with which her great-grandfather appeared in that 1905 image, an enlarged version of which can be seen on the Cairns waterfront. (The photograph depicts a slight but noble figure holding a heavy, painted shield and wearing a shell headband, hairband and pendant, as well as a large breastplate engraved with the words, “Ye-i-nie/King of Cairns/ 1905’’. His initiation scars are visible across his torso.)