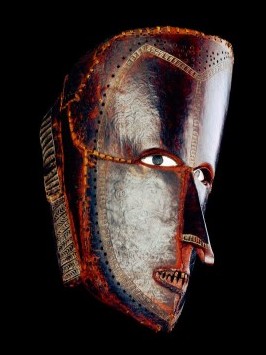 As curator of the BP exhibition Indigenous Australia: enduring civilisation it is a great privilege to be presenting this major exhibition in London. Over the past two years, it has been a special and sometimes moving experience to view and discuss objects in the collection with artists and community visitors from Australia – and to see these special objects up close. It is a big responsibility to put together an exhibition that does justice to the cultural and historical complexity of the story of Indigenous Australia – a story that is still unfolding.

Early British visitors to Australian shores were surprised to learn that there was more than one Indigenous language spoken across the vast continent. Even today in London, audience research makes clear that it is still a revelation to many to learn that there are hundreds of different Aboriginal language groups, each associated with a particular defined territory, and each with distinctive traditions and customs. Few here have heard of the Torres Strait islands and the distinctive culture and history of the Islanders. Familiar names and words in Australia – such as Namatjira, Mabo, ochre, dugong, sheep station and goanna – are foreign to British audiences. Questions such as ‘were there sheep in Australia before the British arrived?’ indicate that Indigenous Australia is still a subject about which international audiences know comparatively little (*see below). Some of the art styles may be recognisable, but the complex meanings and history remain little understood.

In telling this story, with many objects collected in the late 1700s and 1800s, questions of how these pieces were brought to the British Museum and where should they be housed now are likely to arise. Some of these issues are addressed both in the exhibition itself and in the accompanying book. There are individuals who think there are objects in London that should be returned to Australia; others consider that objects exhibited here have an key role in showing the world that the history and culture of Aboriginal people and Torres Strait Islanders is as important, valuable and unique as any other civilisation in the world. These matters will no doubt be further discussed during the exhibition run in London and when many objects go on loan later this year to a related exhibition at the National Museum of Australia.

For me, it is particularly significant that these objects are being exhibited first at the British Museum in London, a city that once sat at the heart of a Britain that ruled Indigenous Australians and the colonies that joined to become the nation of Australia in 1901. Indigenous Australians have been engaging with London and its museums since 1792 when Governor Phillip brought back Bennelong and Yemmerawanne, who visited the Parkinson Museum in London that housed objects from Cook’s voyages. In the mid-1800s Aborigines, such as those on Flinders Island in Tasmania and in the state of Victoria, made appeals to and sent diplomatic gifts to the Crown. At one level, the curation of this exhibition and the engagement of contemporary Indigenous artists in its creation and related events is an extension of this ongoing relationship between Indigenous Australia and the UK, but it puts Indigenous Australians in the centre rather than the periphery.

In the coming two weeks, the British Museum will be visited by a group of Aboriginal and Torres Strait Islander leaders, artists, and museum professionals who will be participating in discussions, giving lectures and seminars, and reconsidering the legacies of colonialism for contemporary museums.

This includes a special event on Friday 1 May: The art of country: Aboriginal and Torres Strait Islander art today, and the conference: Challenging colonial legacies today: museums and communities in Australia and East Africa on Saturday 2 May.

These and other events offer British audiences the opportunity to hear more about the nuances and regional variation in this rich story. I hope visitors to the exhibition and those who attend the related events appreciate the beauty of, and knowledge embedded in, the objects presented, the diversity of Indigenous cultures across Australia, and the complexity of the engagement with outsiders since 1788. Despite being affected by direct violence and the impact of new diseases, this history demonstrates that rather than being passive victims of an aggressive British colonisation, Indigenous Australians have since 1788 engaged with outsiders in strategic and diplomatic ways that continue today.

I would like to acknowledge the generosity of those Indigenous communities and individuals in Australia who participated in discussions about the objects and the exhibition (not all of whom may agree with my views). I would also like to acknowledge the input of my colleagues in Australia at the National Museum of Australia and the Australian National University who, with the help of funding for research through the Australian Research Council, have contributed significantly to the exhibition and associated publication.

*Sheep came with the First Fleet of British settlers and convicts in 1788 and merino sheep, famous for fine wool, in 1796. Spot the beautiful woman’s apron made of wool in the exhibition.

The BP exhibition Indigenous Australia: enduring civilisation is at the British Museum until 2 August 2015.

The accompanying book is available from the British Museum shop online.