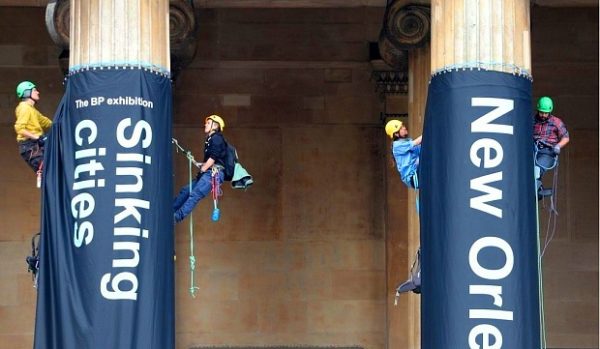 The British Museum in London was forced to temporarily close earlier today (19 May) when Greenpeace activists protested at BP’s sponsorship of the exhibition Sunken Cities, Egypt’s Lost Worlds (until 27 November).

The demonstrators climbed the museum’s front columns, unfurling 27-foot long banners emblazoned with the words Sinking Cities. The museum was subsequently closed from 10am to 2pm to ensure visitors’ safety, a spokeswoman says. A spokesman for the Metropolitan Police said 11 people had been arrested for aggravated trespass.

Greenpeace spokeswoman Elena Polisano says in a statement: “We rebranded the exhibition and dressed the pillars at the entrance with five places that evoke flooding, extreme weather and rising sea levels in the 21st century.” These included New Orleans and Hebden Bridge, a town in West Yorkshire, UK, which was hit by severe floods last winter.

Polisano adds that the environmental group took a stand “because of the irony of an oil company sponsoring an exhibition whose name practically spells out impacts of climate change”.