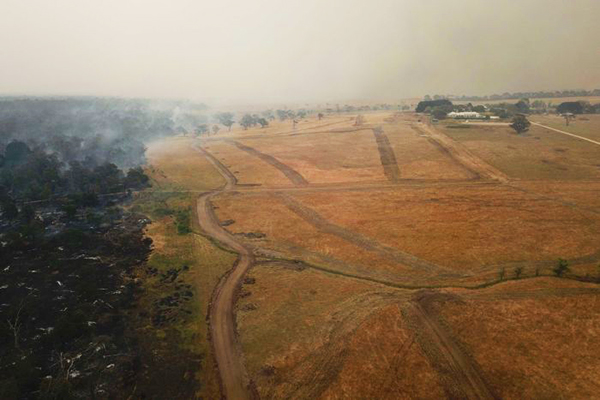 Extra sections of an ancient aquaculture system built by Indigenous people in south-west Victoria thousands of years ago have been discovered after a fire swept through the area over the past few weeks.

The Budj Bim Cultural Landscape, which includes an elaborate series of stone-lined channels and pools set up by the Gunditjmara people to harvest eels, was added to the UNESCO World Heritage List last year.

Some parts of the landscape, which also features evidence of stone dwellings, have been dated back 6,600 years — older than Egypt’s pyramids.

Traditional owners, who inspected the site after the fire was brought under control last week, spotted extra sites previously concealed under vegetation that they believe are part of that aquaculture system.

A fire sparked by a lightning strike at Lake Condah in late December, which was later subsumed by another fire that ignited nearby, was only brought under control last week after a mammoth firefighting effort.

It burnt through more than 7,000 hectares of land around Lake Condah and in the Budj Bim National Park, including some parts of the aquaculture system in an area known as the Muldoon trap complex. 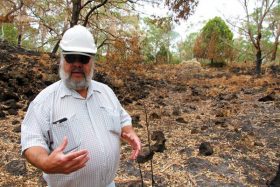 Gunditjmara elder Denis Rose at an area razed by fire near Lake Condah, where new sections of the aquaculture system have been revealed. ABC South West Victoria: Sian Johnson.

Gunditj Mirring Traditional Owners Aboriginal Corporation project manager Denis Rose said when the fire first broke out he was not “too concerned” about how the fire would affect the system.

“Most of the cultural features out here on the lava flow are stone,” he said.

“There have certainly been many fires here in the thousands of years prior.

“Our major concern was the effect after the fire and we’ve still got some work to do there.

“We were concerned about the trees … particularly those taller trees that are growing in and around some of those fish trap systems and also our associated stone house sites, of [the trees] being weakened and damaged and potentially falling over and the roots upending some of these ancient stone structures.”

When Mr Rose and other traditional owners returned to the area after the fire, they were amazed by what they observed in the charred landscape.

“The fire actually uncovered another smaller system, including a channel about 25 metres in length that we hadn’t noticed before,” he said.

“It was only maybe 20 metres off the track that we walk in and it was hidden in the long grass and the bracken fern and other vegetation.

“We’ve noticed that in other parts of the lava flow as well, we’ve come across sites that just haven’t been recorded that have been very close by. 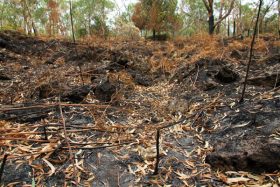 This burnt section of bush near Lake Condah, part of the Budj Bim Cultural Landscape, is believed to be a previously-undocumented channel that forms part of the ancient eel-harvesting system. ABC South West Victoria: Sian Johnson.

“It’s a wonderful opportunity for us to further investigate some of the sites out here.”

New survey to be undertaken

In the wake of the blaze, a cultural heritage survey will be undertaken with input from archaeologists familiar with the site and Indigenous rangers.

Aerial photography using specialised software will be undertaken to survey the landscape as well.

Mr Rose said although the find was positive it took place in the sobering context of the destructive fires that continue to burn in other parts of the country.

“We have been extremely fortunate here,” he said. 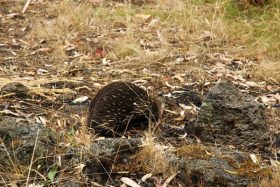 This echidna was spotted soon after the fire, which was considered a relatively ‘cool’ burn. ABC South West Victoria: Sian Johnson.

“We’ve had relatively cool burns — certainly nothing like the damage and the devastation over in the eastern parts of Australia.

“[These fires] have burnt the undergrowth rather than scorching the forest the whole way through.”

Firefighters have been managing fire in and around the Budj Bim National Park since the initial blaze that started a few days before Christmas Day.

“Earthmoving machinery is one of our typical uses for fire line construction,” he said.

“But typically in the volcanic, rocky country it’s quite impractical to use that sort of machinery and with a lot of work and engagement we had done with Gunditj Mirring Traditional Owners, we’d established that there was a significant risk to cultural heritage values in us using machinery.”

“[We knew] if we did have fires in that landscape, we would have to use lower-impact control techniques.”

“We certainly acknowledge the wonderful work that they have done in protecting the lava flow and the cultural features on here,” he said.

Crews managed to keep the first, smaller fire contained during a particularly hot, windy day on December 30, but a lightning strike that accompanied a cool change that swept through that evening sparked a more intense fire in the national park that eclipsed the initial one.

Mr Mellington said over the weeks the crews worked on the fire they used aircraft to drop both large quantities of water picked up from Lake Condah and fire retardant.

Crews on foot using canvas hoses were also crucial in the firefight.

“That was some really tough, intensive work by both Fire Forest Management crews supported by the Country Fire Authority, and we also had the Budj Bim rangers from Gunditj Mirring helping out as well,” Mr Mellington said.

Nearby communities such as Bessiebelle were urged to evacuate during the worst flare-ups, but fortunately no private structures were lost in the fire.

“With that in mind we really needed to work through the best possible control strategy to contain the fire to the smallest area possible.

“Certainly things like environmental and cultural values are significant, but we really do need to preference human life over all other things.”

Mr Mellington said although he was confident the fire was under control, there was still a risk of it worsening again over the remainder of summer and beyond.

“We’d love to get a couple of inches of rain,” he said.