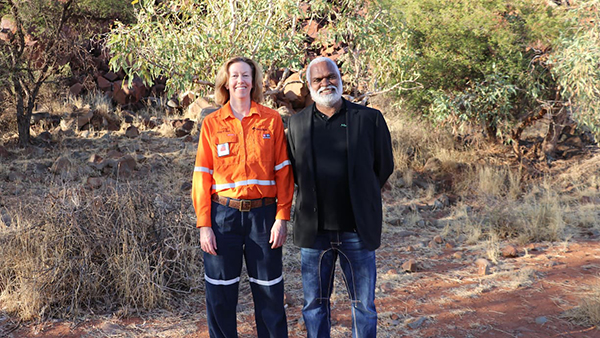 Murujuga Aboriginal Corporation’s ambitious plans for a Living Knowledge Centre on the national heritage-listed Burrup Peninsula, 35km from Karratha, has received a $4 million boost from Woodside.

The energy giant announced the contribution to the centre today as part of their $34 million commitment to heritage, cultural and arts projects in the region.

“When you combine one of the world’s oldest cultures with a pristine environment which is within easy reach of a growing regional centre, you have the foundations for a world-class tourism asset,” he said.

“The centre will be a world-class eco-cultural facility for the display and curatorship of rock art which will help maintain, promote and celebrate the rich and ancient cultural values of the Burrup,” she said.

“The international significance of the region’s rock art is recognised in the decision by the traditional owners and the Premier of Western Australia to pursue World Heritage listing for the Burrup Peninsula.”

Mr Jeffries said they wanted the Living Knowledge Centre to showcase the rich cultural heritage of the Burrup and put the world’s largest art gallery on the map.

“The centre will be constructed to tell stories from the stones and guide visitors through the ancient land that is Murujuga,” he said.

“We are planning to establish a versatile eco-accommodation facility that will allow people to immerse themselves in both the cultural and natural environment.”

“The construction of supporting infrastructure such as an access road and jetty in Conzinc Bay will further enhance the precinct and raise the bar for tourism experiences in the region.”

MAC are undertaking a detailed business case and a timeline for construction will be known once it’s completed.

In the meantime, a flora and fauna survey will take place at Conzinc Bay in mid-July.