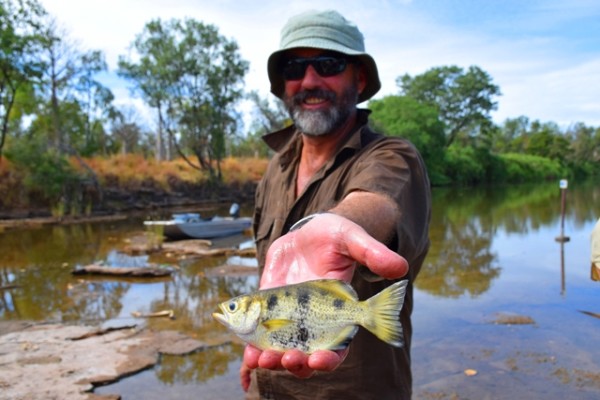 Gavin Dally with an Archerfish. Source: Museum and Gallery of the Northern Territory.

A team including staff from the Museum and Gallery of the Northern Territory (MAGNT), Northern Territory Parks and Wildlife, Indigenous rangers and field assistants have recently completed the latest Bush Blitz expedition in the spectacular Judbarra/ Gregory National Park, in north western Northern Territory. Bush Blitz is a project designed to intensively survey and document the plants and animals across Australia’s National Reserve system and is a partnership between Parks Australia – Australian Government, BHP Billiton Sustainable Communities and Earthwatch Australia. It is focused on species discovery, driven by the knowledge that up to 75 per cent of Australia’s biodiversity is unknown to science.

The National Reserve System forms a network of more than 9000 properties, covering more than 11 per cent of the continent, including national parks run by all levels of government, lands managed by Indigenous owners and non-profit organisations, and parts of working properties managed for conservation by farmers.

Bush Blitz began in 2010 and has conducted expeditions to diverse areas including Flinders Island in Bass Strait, Queensland’s wet tropics, the Gawler Ranges in South Australia and now to the stunning Judbarra/ Gregory National Park. Over the last five years these expeditions have found more than 900 new species, located 250 threatened species, and recorded 12,000 types of plants and animals in new localities. The latest expedition at Judbarra/ Gregory discovered at least seven new species of spider, including a previously unknown genus of tarantula. Other highlights included a record of one of Australia’s rarest fish, the Neil’s Grunter (Scortum neili) and the first record of the swamp eel from the Victoria River catchment.

While conducting a survey in the field might be the most exciting part of a Bush Blitz, a lot of the work takes place afterwards, as scientists return to museums and herbaria to identify, document and preserve the specimens and data collected, and work towards making new information available to land managers, government agencies and the public. These new specimens and sightings add to more than 30 million records held by museums and herbaria across the country. Museums and other collections play a vital role in preserving these specimens for the use of scientists and the general public, and preserving this invaluable record of our nation’s biodiversity for the future.

Collections are particularly important in species discovery and taxonomy, as type specimens of newly discovered species are lodged in public collections such as museums, so that they are preserved indefinitely, and always accessible for review. Types are the individual specimen whose characteristics are described in the scientific paper naming the new species. Preservation and accessibility of these specimens ensures that future generations of taxonomists can verify identifications and expand our knowledge of the world around us. There are often new species to describe from the trips, either as complete new finds, or key material that contributes to broader detective work that helps uncover how many species are actually present.

Upon their return to the museum, staff prepare each specimen for long term storage, which can include fixing tissues of mammals, fish and reptiles, pinning and drying insects, identifying species,and carefully labelling each specimen.

Once the specimen is safely preserved, museum staff record information such as the identification, location and date of capture in databases, so those data can be used for all sorts of research, including large and small scale ecology, genetic analysis and land management.

This process takes considerable time, but data resulting from the Judbarra/ Gregory National Park Bush Blitz expedition will eventually be published online through the Atlas of Living Australia, for the information of the research community and general public. Bush Blitz records will add to more than 10 million collections-sourced records that form an invaluable resource in our quest to better understand Australia’s biodiversity.