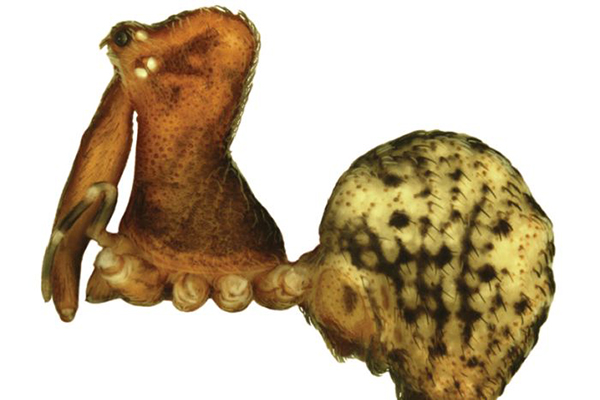 This species of assassin spider, seen here preserved and without legs, is only known from Kangaroo Island. (Supplied: Mike Rix).

An ancient species of spider found only on Kangaroo Island is feared extinct after bushfires tore across the region last week.

The species of assassin spider — Zephyrarchaea austini — also called the pelican spider, is only known to occur in the Western River Wilderness Protection Area on Kangaroo Island.

The entire region where the spider is found was burnt in the blaze, which razed more than 200,000 hectares of bush and farmland, according to Mike Rix from the Queensland Museum, who first described the spider.

“It’s only known from the…north-west of the island,” Dr Rix said.

“As far as we know that area was significantly impacted. We’re very concerned that they may have been gravely impacted if not wiped out.”

Unlike some spiders that are able to burrow, or when young, to “balloon” through the air to escape fires, assassin spiders, which measure only 2 millimetres tall, live in the leaf litter on the forest floor.

“As far as we know, the only way they can deal with fire is if there are untouched patches of habitat. Our biggest concern with the Kangaroo Island fire is that it was so destructive and so hot.

“Our concern is that the entirety of their range was burnt.” 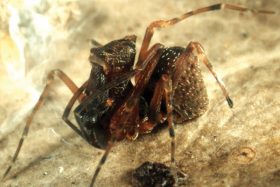 Assassin spiders are part of an ancient lineage, and were known from fossils dating back to the Jurassic period more than 140 million years ago.

Other assassin spider species are found in Madagascar and South Africa, and were once widely distributed across the ancient southern supercontinent Gondwana.

While bigger mammals like koalas and kangaroos have been the focus of concern during the bushfires, it’s the wiping out of smaller animals that will have the biggest ecological impact, according to Dr Rix.

“Small animals are the foundation of healthy ecosystems,” he said.

“Insects are crucial in all food webs in any major habitat on Earth and spiders are major predators of insects.”

While the arthropods — insects, spiders and crustaceans — may not be as photogenic as koalas, ecosystems collapse if they’re not present.

They’re food for larger animals, but they also recycle nutrients back into the system, help control pests and pollinate plants.

“We’ve heard about a lot of the cute and cuddlies — koalas etc,” Dr Rix said.

“[But] it’s really important that there are long-term follow up surveys for threatened species [like assassin spiders].”

Assassin spiders are specialised predators of other small spider species. They use their large front fangs to spear their prey.

It will take months before researchers are able to get into many of the fire-affected regions and assess the damage to native wildlife, but they fear the assassin spider may only be one of a number of extinctions as a result of the unprecedented blazes.

If it is confirmed, it will add to Australia’s list of climate change extinctions, after the Bramble Cay melomys was officially declared extinct last year.