You are here: Home » Articles filed under: 'News' » Article: 'Bust of Nefertiti' 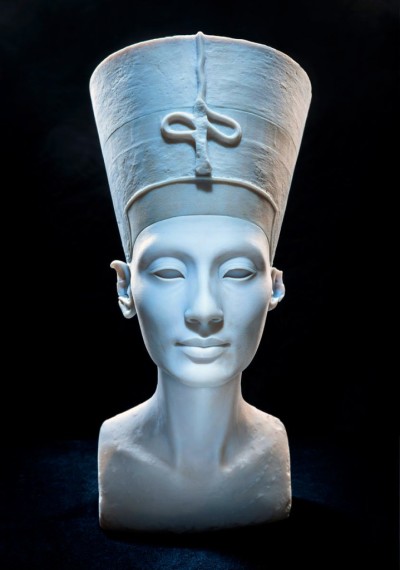 Last October, two artists entered the Neues Museum in Berlin, where they clandestinely scanned the bust of Queen Nefertiti, the state museum’s prized gem. Three months later, they released the collected 3D dataset online as a torrent, providing completely free access under public domain to the one object in the museum’s collection off-limits to photographers. Anyone may download and remix the information now; the artists themselves used it to create a 3D-printed, one-to-one polymer resin model they claim is the most precise replica of the bust ever made, with just micrometer variations. That bust now resides permanently in the American University of Cairo as a stand-in for the original, 3,300-year-old work that was removed from its country of origin shortly after its discovery in 1912 by German archaeologists in Amarna.

The project, called “The Other Nefertiti,” is the work of German-Iraqi artist Nora Al-Badri and German artist Jan Nikolai Nelles, who consider their actions an artistic intervention to make cultural objects publicly available to all. For years, Germany and Egypt have hotly disputed the rightful location of the stucco-coated, limestone Queen, with Egyptian officials claiming that she left the country illegally and demanding the Neues Museum return her. With this controversy of ownership in mind, Al-Badri and Nelles also want, more broadly, for museums to reassess their collections with a critical eye and consider how they present the narratives of objects from other cultures they own as a result of colonial histories.