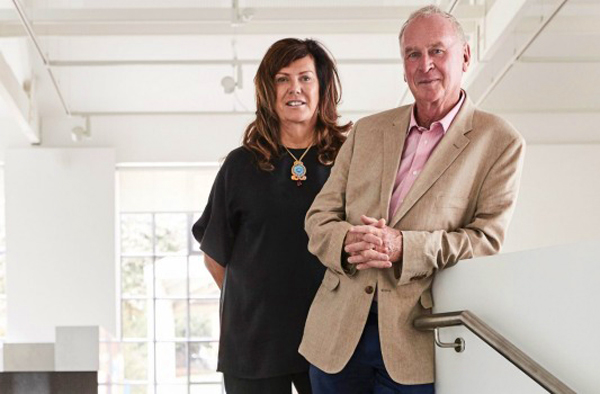 You can tell Michael Buxton, Australia’s latest Rich List patron of the arts, is a property developer. He’s into recycling assets.

At least, that’s the approach he takes to Buxton Contemporary, the museum he’s opening in Melbourne’s Southbank arts precinct next month to house his 354-work collection by 59 artists.

He wants to ensure the contemporary art collection he started in 1995 stays fresh. There’s one way to ensure that.

“We could sell everything 10-years-old and keep it refreshed,” Buxton says. “That’s the way I would have done it. This is supposed to be contemporary, which means it’s of the now.”

It’s a great idea, but doesn’t work for a collection that has tracked a handful of leading Australian contemporary artists, including Howard Arkley, Mike Parr and Tracey Moffatt, and acquired works that track their changing styles and features.

Fortunately for the University of Melbourne, owner of the collection that will be housed at the $12-million Fender Katsalidis-redesigned 1920s building that opens next month, Buxton will not be running the show. That falls to Ryan Johnston, the new museum’s inaugural director.

Johnston, previously head of art at the Australian War Memorial, is diplomatic about the contradiction.

“That’s going to be a discussion we’ll have,” he says. “We still have this idea of wanting to pay close attention to particular artists.”

One way the museum could resolve the point is by focusing on exhibitions of its preferred artists’ works rather than keeping them in its own collection, he says.

But he points out that as a new museum – his preferred term as “gallery” he says implies sales of works – they aren’t bound to a fixed model and can work it out as they go along.

“There’s no tradition we’ve got to stick to and no implied rules.”

While there are an estimated 300 significant private contemporary art collections around the world, there aren’t many in Australia. Buxton – who cites Basel’s Fondation Beyeler as “the best-run private museum I’ve ever seen” – points to a few existing ones in Australia such as TarraWarra and Heide in Victoria and David Walsh’s MONA outside Hobart. The Loti and Victor Smorgon Collection of Australian Contemporary Art influenced his choice of works.

But private collections globally have started playing an increasingly public role, and while Buxton Contemporary’s eponymous founder has guaranteed its first two decades of operation with a $9 million endowment, Australia’s newest public private collection is still going to to have to make its own way in a world that demands commercial sustainability.

There is also a boom in new public museums across the country, including the $428-million New Museum for WA, due to open in 2020, the $34.5 million Shepparton Art Museum in Victoria, the Orange Regional Museum that opened last year, the redevelopments of Sydney’s Australian Museum and the Art Gallery of NSW.

Smaller, private galleries may not be able to offer blockbuster events that draw in large numbers of visitors and boost revenues. They can, however, successfully benefit from close relationships with nearby public museums and borrow works – as they can from relationships with other private galleries – to focus on areas that larger museums would not and ensure repeat visitors.

“It’s hugely successful and financially sustainable but, on the other hand, it’s not for everybody,” says architect David Gianotten of Dutch firm OMA, which designed the latest MPavilion in Melbourne and is working on the new Perth museum with Hassell.

Johnston says Buxton Contemporary will be trying to differentiate itself from other museums in the St Kilda Road precinct that already include the National Gallery of Victoria across the road and the Australian Centre for Contemporary Art. The initial plan is to hold three exhibitions a year, the first of which, The Shape of Things to Come, will feature works by more than 20 artists from the Buxton collection by Ricky Swallow, Emily Floyd, Hany Armanious and Mikala Dwyer.

“Any new museum needs to find its unique niche that it fills and establish a very strong sense of identity in order to be visible, not just in a busy cultural space, but a very busy entertainment space as well,” he says.

And while the donor won’t be managing the museum, he’ll be watching.

“We’ve got to run it like a business,” Buxton says. “If they have more staff than we’ve imagined, that’s their problem, not mine. I would run it very tight.”