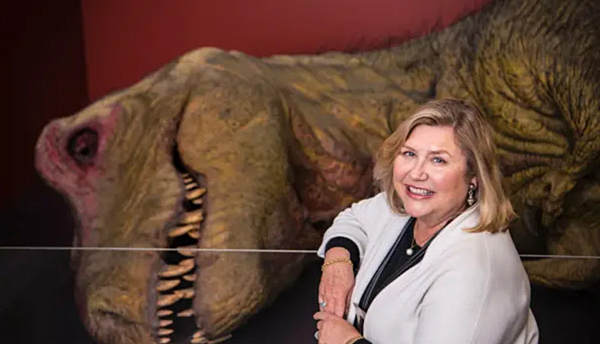 In the play Lady Windermere’s Fan, Oscar Wilde’s Lord Darlington quipped to Cecil Graham that a cynic was “a man who knows the price of everything and the value of nothing”.

“And a sentimentalist, my dear Darlington, is a man who sees an absurd value in everything, and doesn’t know the market price of any single thing.”

Enter Kim McKay, who took up the Australian Museum directorship almost five years ago after a long career as a businesswoman and environmentalist.

When she walked through the Australian Museum’s door, Ms McKay understood the acute responsibility that comes with taking care of Australia’s 21 million strong natural history collection from across the country and globe, which is worth $1 billion when its prime real estate building in the centre of Sydney is included.

The museum has amassed the southern hemisphere’s biggest collection of objects and specimens, including the now extinct Tasmanian tiger.

“Australians value wildlife and the natural world because it defines us,” said Ms McKay, who is the co-founder of the environmental movement Clean-Up Australia.

“But mass extinction of animals shows us we haven’t been very good caretakers of the environment.

“The museum is important because it reflects who we are, and reminds us of the need to preserve and protect our social, cultural and natural heritage.”

But as a businesswoman, she knew something wasn’t right. 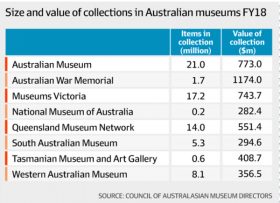 “I realised the way our collection was being valued was inconsistent,” she said.

“There was one year when the collection was substantially valued down. That confused me. How could it be devalued?”

Being neither a cynic nor a sentimentalist, Ms McKay knew the cultural and historical value of the collection. But to be a genuine custodian of the museum she believed she also needed to know how much it was worth and the cost of replacing objects should something go wrong.

“Knowing this helps me go to the government to plan and to ask for more experts to help protect and maintain the collection,” she said.

Other museum directors across Australia and New Zealand had told Ms McKay they also received inexplicable variations in the way their collections were valued.

“Practices in the industry were wide and varied, and there were quite a few cowboy valuations out there,” said John Buttle, the museum’s former chief financial officer.

“Each museum did their own thing and there was significant variation. Those valuing the collections weren’t bound by rules so some of their valuations were way off the mark.”

Once Ms McKay decided that the valuations process needed to be standardised, Mr Buttle said she became the “driving force” on the Council of Australasian Museum Directors to establish a new best-practice methodology for the valuation of collections at “fair value”.

“Before this body of work was undertaken each state and territory employed different valuation methodologies, which led to inconsistencies, a lack of comparability and an inability for our region to have confidence in the valuations,” said Ms McKay.

Welcomed by Chartered Accountants Australia & New Zealand, Certified Public Accountant Australia and the state and territory treasuries, the new CAMD framework – which was introduced in November – provides a consistent valuation framework for the more than $6 billion of assets held in Australian museums.

“Natural history has captivated us from the first Australians to now,” Ms McKay said.

A true valuation was important to maintain and protect the museum’s collection and fund research, said Ms McKay.

“This assists our understanding of the most pressing environmental and social challenges facing our region: the loss of biodiversity, a changing climate and the search for cultural identity.”