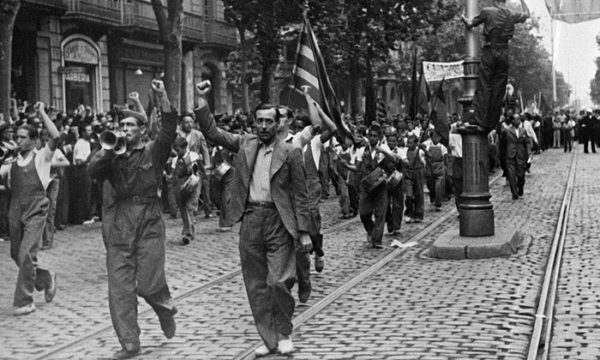 Republican supporters march through Barcelona in July 1936 to protest at the military coup. Photograph: STF/AFP/Getty Images.

Julian Coman, Campaign for Barcelona museum to tell at last full story of Spain’s civil war, The Guardian, 29 May 2016

A group of internationally respected historians and writers have called for the first major museum of the Spanish civil war to be created in Barcelona, 80 years after the century-defining conflict began in July 1936.

In an unprecedented initiative likely to spark fierce debate in Spain, Dr Pelai Pagès, professor of history at the University of Barcelona and president of the Association of the International Museum of the Spanish Civil War (Amigce), has written to the city’s leftwing mayor, Ada Colau, asking that a building be set aside in central Barcelona to house the museum and a research centre. Pagès told the Observer: “Eighty years after the start of the civil war, and 40 years after the death of General Franco, recovering the memory of what happened for all generations, from the youngest to the oldest, means understanding the conflict in its totality.

There is a sad old saying that a society that forgets its past is destined to repeat it. From this perspective, the International Museum of the Spanish Civil War intends to act as a guarantee for the future.”