You are here: Home » Articles filed under: 'News' » Article: 'Campaign to get Creepy Santa to Te Papa'

Campaign to get Creepy Santa to Te Papa 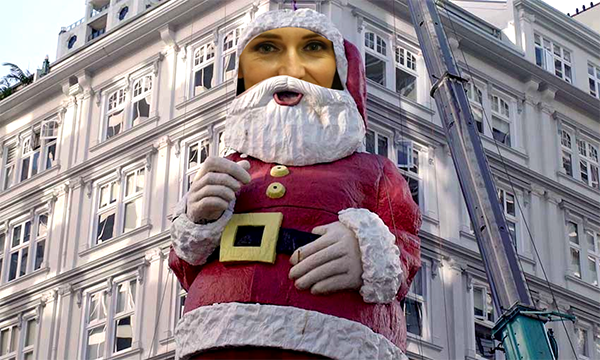 THIS IS FINE DON’T OVERTHINK IT

In a powerful rebuff to critics who question whether the prime minister is willing to use her political capital, this morning she powerfully demonstrated her commitment to New Zealand culture.

For two years, my professional life has been devoted to winning respect for the lowbrow, beaten-up, off-brand artefacts that truly define New Zealand. Things like Suzanne Paul’s original pot of Natural Glow, the Big Fresh Animatronic Fruit and Veges, or the original lettering of the Huntly DEKA Sign.

By almost any measure, my efforts have been a spectacular failure. I’ve been shot down by Te Papa, stonewalled by Auckland Council, toyed with by MOTAT, and rebuffed by Auckland War Memorial Museum. Recently I was served one final, unnecessary reminder of my ineptitude: the announcement that Auckland’s Giant Santa will be retired after the coming Christmas season.

This morning, a glimmer of hope emerged. In an appearance on The Breeze’s morning show with Robert Rakete and Jeannette Thomas, Prime Minister Jacinda Ardern was asked whether she would miss Auckland’s Giant Santa. “Yes, he’s an icon. Creepy Santa!” she said. Then, and this is important, she went further. “We’ll send him to Te Papa,” she concluded.

That is what is known in politics as a policy announcement. Before an audience of thousands, the prime minister pledged to enshrine Auckland’s Giant Santa in the bowels of our national museum. We must hold her to that pledge. The most powerful person in New Zealand can’t be allowed to say one thing on The Breeze and do another thing in The Beehive.

In announcing Santa’s imminent doom, Heart of the City said it was “looking for appropriate disposal unless anyone shows an interest in discussing options”. Ardern has shown an interest in discussing options. This is a chance for the coalition government to put a stake in the ground as a pro-Santa administration, and more importantly an anti-“disposal” administration. The time for talk is over. Now it’s time for action. It’s time for the politicians to get Santa to Te Papa.