You are here: Home » Articles filed under: 'News' » Article: 'Can museum Boards ever be immaculate?'

Can museum Boards ever be immaculate? 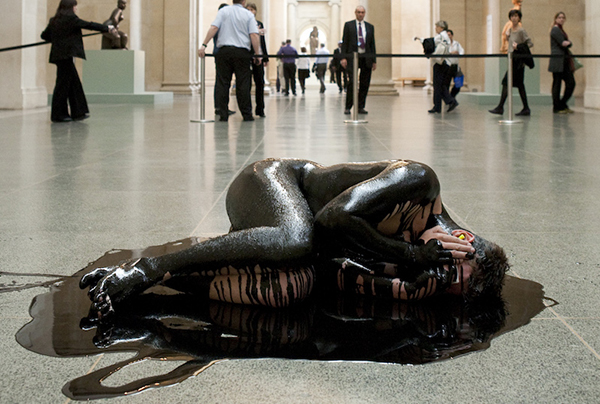 Julia Halperin, In an Age of Political Division and Dirty Money, Can Museum Boards Ever Be Immaculate? Some Think They Have Found a Solution, ArtNet, 17 July 2019

From coast to coast, museum boards are being asked to answer for the source of their fortunes. What happens next?

When academics look back, it’s possible that 2019 will be remembered as an inflection point in the history of museums and their relationship to money. Over the past nine months, major art institutions—and more specifically the people who fund and run them—have come under unprecedented scrutiny.

Earlier this spring, demonstrators targeted the Whitney Museum of American Art in New York for protests on consecutive Fridays for nine straight weeks, calling for the resignation of Warren Kanders, the museum’s board vice chairman and CEO of Safariland, a defense manufacturer that has sold tear gas used on migrants at the US-Mexico border. And in London last month, Yana Peel, the director of the Serpentine Galleries, resigned after a Guardian report (which she disputes) linked her to a cybersecurity firm that has been accused of spying on journalists and activists. Similar criticisms have been levied at the investments of board members at the Museum of Modern Art in New York, the San Francisco Museum of Modern Art, and other art institutions, calling into question their ethical propriety.

With no industrywide guidelines to help them navigate this new era, board and staff members alike are flailing. When is money too dirty to accept? What if you’ve already accepted it? Does it matter if the funding source was uncontroversial at the time? Is there any way out of this mess?

Some in the museum field think they have found one. The answer, advocates say, is to open the hood of museums and rewire their internal structure so that board members have less power and other community stakeholders have more. Such a proposal may not be extreme enough to please those on one side of this debate, and too profound for those on the other. It also might be entirely impractical. But the fact that it is being seriously discussed reveals just how deeply these criticisms are rattling the foundations of museums, raising existential questions about their very structures.

That board members are attracting scrutiny is nothing new. Back in 1969, members of a newly formed art collective called the Guerrilla Art Action Group infiltrated MoMA’s lobby with bags of bull blood under their clothes and wrestled with one another until the bags burst, leaving their bodies covered in blood. The goal was to call attention to then-MoMA trustee Nelson Rockefeller’s ties to a manufacturer of weapons being used in the Vietnam War. (Sound familiar?) But now, unlike 50 years ago, such information and imagery can be disseminated around the globe with the tap of a screen. And that makes it a lot harder to ignore. 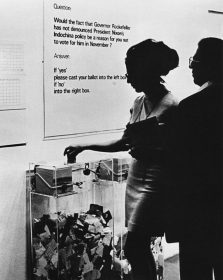 This added exposure just serves to highlight a problem that has always existed at the core of museums, which is that, in the current paradigm, boards serve two roles. First, they act as the institution’s primary governing body. Second, they act as an increasingly crucial source of funding. (Board members must often give six-figure gifts to their institution annually to retain their positions; with the decline of corporate and government funding, those contributions have become ever more vital.)

In other words, board members are both Wall Street and the regulators—tasked with policing the institution they steward and their own stewardship at the same time. “Those two pressures are in conflict,” says Adrian Ellis, the CEO of AEA Consulting. “It’s the dilemma at the heart of the model.” 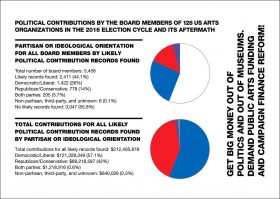 Andrea Fraser’s postcard for SuperPak, by Artists4Democracy, based on her 2016 book Museums, Money, and Politics.

In the wake of the 2016 US elections, the artist Andrea Fraser published 2016: in Museums, Money, and Politics, a thorough accounting of the partisan donations of board members at museums across the country. That project, she wrote, “developed out of my personal sense of horror at discovering supporters of radical right-wing politicians serving on the boards of arts organizations with which I work and whose missions are directly threatened by the policies these politicians advance.”

When it comes to the new sharpened focus on museum boards, she now offers a proposition: Why not separate the governance from the funding?

There is no good reason, in Fraser’s estimation, that those tasked with governing the institution have to be the ones who fund it. She envisions a scenario in which board members would no longer be required to contribute a set amount of their own money. This core group, then, would be augmented by councils with representatives from museum staff, community members, and artists, who might also be represented on the board or an oversight committee tasked with policing the board’s decisions and pushing them on critical issues.

“It’s a vision for institutional reform that’s basically about democratizing governance within institutions,” she says. “It seems a lot more realistic than starting out by completely transforming the financial basis of museums.”

Such a shift, she says, would also make museums more aligned with other fields, like medicine, science, social services, and education, where board members are selected based on professional expertise, scholarship, and their ability to further the institution’s mission. “The arts appear to be at the extreme of prioritizing wealth over all other criteria,” she notes. “It is easy to see how major decisions like the hiring of directors and architects are impacted in many museums by the lack of a range of stakeholders on boards.”

In a similar vein, the photographer Nan Goldin—who has been leading the charge against the Sackler family’s museum funding due to their role in the opioid crisis—and the artist Hito Steyerl are currently working together to develop their own ethics guidelines for museum boards.