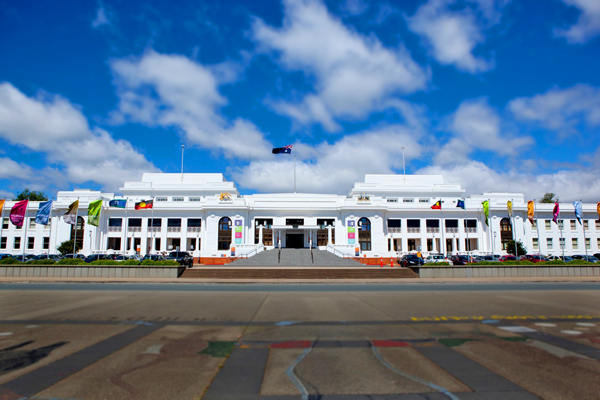 Amid the unedifying spectacle that was the federal Liberal Party meltdown last week, at least some productive business was under way at Parliament House.

Last Friday was a public hearing of the inquiry into Canberra’s national collections. And it’s perhaps appropriate that one of the topics under discussion was the loss of trust in public institutions.

Daryl Karp, director of the Museum of Australian Democracy at Old Parliament House, reminded the inquiry that trust in elected representatives has slumped. Confidence in governments is at a historic low.

People feel disengaged from politics and from the democratic process. What is the role of our national collecting institutions in this sorry state of affairs?

The museum sees itself as part of the solution. Its exhibits are all about Australia’s democratic traditions and about encouraging participation.

The MOAD is just one of the national collections in Canberra — the others include the National Gallery of Australia, the National Library of Australia and the Australian War Memorial — that play a vital role in engendering national pride and an understanding of our rights and responsibilities as Australians.

The National Library is where you will find explorer James Cook’s journal, a manuscript of such import to the nation that it carries the catalogue number MS1.

The NGA and the National Museum tell the Australian story through our visual culture and objects. The first thing visitors to the NGA encounter is the display of intensely symbolic and arrestingly beautiful funeral poles from central Arnhem Land, a memorial that puts indigenous heritage front and centre of the national story.

The War Memorial is the national capital’s solemn heart; as well as being a shrine of remembrance, it is a museum and archive of Australia’s military history. As director Brendan Nelson points out, the War Memorial is the place where people come to understand the nation’s soul – because it honours the people who gave their lives to defend and protect our values and freedoms.

He recently met at the memorial two women wearing burkas who were migrants from Pakistan, and their children. It was their third visit to the memorial, they told him, and it was “where we learned to be Aussie”.

Each of these institutions — along with the National Portrait Gallery and the National Film and Sound Archive — offers a different window on to our nationhood, explains who we are as a people, and encourages understanding and social cohesion.

More than 160,000 students from around the country visit Canberra on school excursions each year and on any given day at the NGA or the War Memorial you can share the joy of discovery in the company of these young Australians, the voting citizens of the future.

The inquiry into Canberra’s museums, libraries and memorials is examining the innovative ways in which they are seeking to increase their profile, visitor numbers and revenue. The hearings have been told of the terrific work they do to make their collections interesting and accessible, but also about government imposts that restrict their national character-building function.

The efficiency dividend is an enforced saving on the public service that is intended to increase productivity. The irony is that the cost-cutting is applied to organisations whose remit is to collect and to grow.

Budget cuts were responsible for the NFSA closing its permanent exhibition of film memorabilia and for the closure of the NGA’s contemporary art space on Lake Burley Griffin. In 2016 the NLA had to suspend uploading material to its hugely popular Trove archive because of the cuts, although it has since had a $16.4 million boost to help maintain this vital service.

Nelson says all institutions can become more productive, but he and others agree there’s a point at which relentless cost-cutting eats away at an organisation’s core mission.

Another limitation is the cap on average staffing levels, which means that essential work often has to be outsourced. The staff limit applies even in cases where institutions have raised funds from the private sector.

Staff with the expertise to manage our valuable collections have been let go and institutions are spending money on contractors to get essential work done.

Shortfalls have been patched with funding boosts for the War Memorial, the NGA and the NLA. But such periodic increases and the “lumpy” budgets they produce do not help the institutions in their long-term planning. National collections could be made exempt from the efficiency dividend. Another proposal is to make available to them a share of about $20m in parking fees collected in the ACT each year.

Federal politics returned to a semblance of normality on Sunday with Scott Morrison’s appointment of a ministry that has returned Mitch Fifield to the communications and arts portfolio. There are many pressing matters of government business but somewhere on the agenda should be a sustainable plan for the national institutions.

The future of our democracy may depend on it.