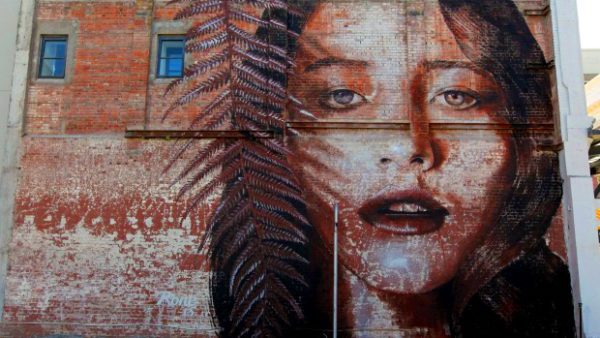 Rone’s work on Worcester St is one of many Christchurch murals featured in the Lonely Planet Street Art book.

Christchurch is ranked alongside New York, Barcelona, Berlin and London as one of the street art capitals of the world in a new Lonely Planet book.

The book names Christchurch as one of 39 cities around the world with a rich street art scene.

It credits the birth of the Christchurch street art scene with the 2011 Canterbury earthquakes and the RISE street art festival and exhibition in 2013.

“The contemporary street art scene was born out of tragedy,”  the book states.

“Street art has become a vital part of the energy of the rejuvenated city.”

Nelson art collector George Shaw organised the first street art festival in Christchurch in 2013 through his Oi You! business. He built the show around his collection of 22 artworks by British street artist Banksy and commissioned new works on city centre walls.

It became the most visited show in Canterbury Museum history. The event then moved to the YMCA on Hereford St for shows in February and December 2015.

Shaw has since fallen out with the YMCA and taken his collection to a festival in Tauranga.