You are here: Home » Articles filed under: 'News' » Article: 'CM first in Australasia' 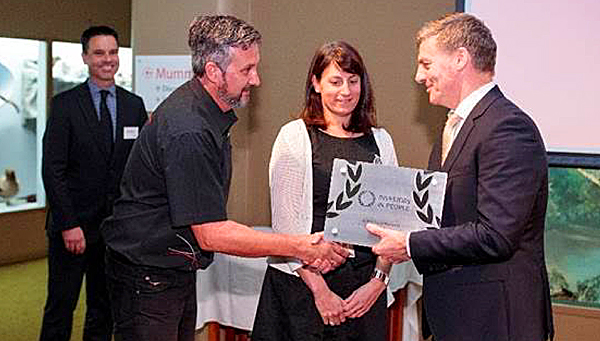 Canterbury Museum is the first organisation in Australasia and only the second outside the United Kingdom to achieve Investors in People Platinum accreditation for best practice people management.

The Prime Minister The Rt Hon Bill English presented the award to  Museum staff during a celebration event at the Museum today. Michael McEvedy, Canterbury Museum Trust Board Chair, said “This is a tremendous accolade for Director Anthony Wright and the staff. The Museum team is high performing, motivated and engaged. Staff punch well above their weight in delivering outstanding customer service and consistently over perform in meeting the Museum’s annual objectives and work programmes.”

Stuart Burgess, Investors in People New Zealand added that securing the recently introduced Platinum Standard was a major achievement. The assessment process gathered evidence in a number of ways over several months. It included confidential staff surveys, face to face management and staff interviews conducted by an Investors in People assessor, as well as workplace observation and written evidence.

The Museum had been assessed against 27 criteria across nine indicators of people management best practice. It achieved the highest level of ‘High Performing’ in eight indicators and the second highest level of ‘Advanced Performing’ in one indicator. In recommending that the Museum for Platinum accreditation, the assessor, Liz Gordon said that the Museum had “intentionally created a culture where employees, at all levels, live the values and are genuinely engaged in and committed to the work they do.”