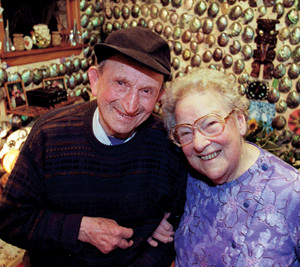 Museum Director, Anthony Wright says with an average of 3,000 visitors a week, it’s pleasing that people are still fascinated with the story of how the late Fred and Myrtle Flutey, a Bluff couple with an unusual living room, came to be New Zealand icons.

“It’s always a thrill to hear visitors gasp with delight when then enter the Flutey’s lounge which is faithfully recreated, along with the frontage of the house, in the exhibition. Their story, which is told in a short film as an introduction to the exhibition, is much more than the paua shells on the walls,” says Mr Wright. “It’s the story of how a kiwi couple with wonderful personalities and a passion for collecting created something special in their front room which delighted visitors for many years in Bluff and now continues to do so at the Museum.”

Mr Wright says that the Museum is on track for another year of record visitor numbers. “We’ve welcomed more than half a million people through the doors of the Museum and Quake City in the last nine months and we’re almost 90% of the way towards meeting our annual target of 575,000 visitors and more than 75% towards our annual target of $155,000 in door donations. In both cases we’re just ahead of where we were this time last year.”

Quake City, the story of Canterbury’s earthquakes, is currently rated 10th of 186 listed attractions on TripAdvisor.com, while the Museum is rated sixth.