You are here: Home » Articles filed under: 'News' » Article: 'Capturing the Cosmos'

Look back billions of years to the first stars of the universe, thanks to breakthrough telescopes. 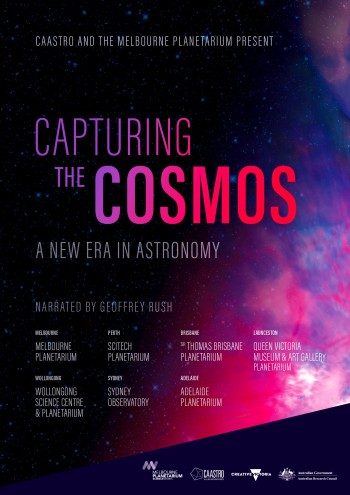 It’s lights down at the Melbourne Planetarium. Geoffrey Rush’s voice rolls in from the speakers. He invites you on a journey through time. Overhead a star explodes across the giant dome screen. Galileo adjusts his telescope and the scene shifts.

This is Capturing the Cosmos, the new show by Museum Victoria that opens tomorrow around Australia. It features an original score recorded by the Bratislava Symphony orchestra and narration by Rush. The film takes audiences from history’s earliest astronomers through to the groundbreaking technology of today to help unravel our place in the universe.

Astronomer Dr Tanya Hill led a team of animators and filmmakers to compile the work from the lenses of two of Australia’s most advanced telescopes – the SkyMapper and Murchison Widefield Array (MWA).

“When we look up at the night sky we are looking back in time,” says Dr Hill. “Light has taken so long to reach us that we are seeing things as they were millions or even billions of years ago.”

Capturing the Cosmos is a collaboration between Museum Victoria and the Commonwealth-funded Centre for All-sky Astrophysics (CAASTRO). The show gives audiences a rare peek even further back in time into an area of the night sky usually off limits to the human eye. It’s known as “the dark ages” – an era between the Big Bang and the creation of the first stars.

“The MWA is one of the first telescopes that can peer across the dark ages and help us understand how the first stars and galaxies lit up the universe,” says Dr Hill.

The SkyMapper allows us to glimpse into that mysterious force which continues to confound scientists – dark energy.

“Dark energy can’t be seen, just like we can’t see the wind, but like a snowflake spiralling around on a windy day, you can see the effect that the wind has,” Dr Hill says. “It actually pushes space apart.”

CAASTRO director Professor Elaine Sadler says she and her team are excited to reveal some of the latest in astrophysics to Australian audiences under the “big sky” of the Planetarium.

“I hope this planetarium show can convey some of the wonder of the universe we live in and the big questions that CASSTRO astronomers are working to answer.”

Capturing the Cosmos will screen nationally at Planetaria across Australia at 7pm Monday March 21 (AEST). Further screenings will be held at the Wollongong Science Centre and Planetarium on March 23.

The show will open to the public at the Sydney Observatory from March 22.