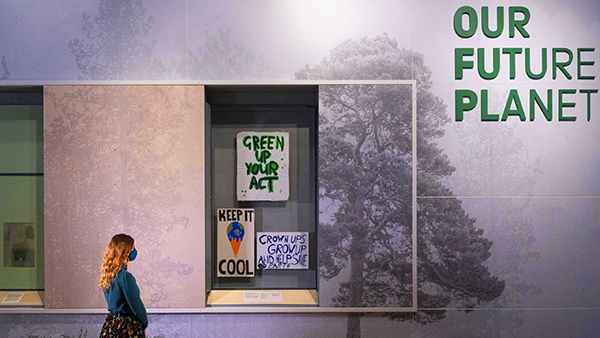 Mechanical trees, carbon toothpaste, and a yoga mat are the latest objects on display in the Science Museum.

When the current health crisis is over, the world will be facing the next global emergency: climate change. That’s a disheartening reality, but it’s a topic that the Science Museum’s latest free exhibition handles carefully.

Wary of the public’s crisis fatigue, Our Future Planet, which opens 19 May, offers a cautiously optimistic overview of carbon capture’s potential to be used as an effective tool to combat global warming.

The Science Museum has been criticised for making fossil fuel giant Shell one of the exhibition’s lead sponsors, a decision that environmental campaigners say undermines its message. The museum has defended the move, saying it is “committed to working with funders who are also on a journey to decarbonise”, and is the first cultural institution to use the Transition Pathway Initiative to assess the progress of its partners.

Carbon capture is the practice of capturing carbon dioxide and storing it safely, reducing excess atmospheric levels of CO2 and mitigating global heating.

It’s the UK’s first-ever exhibition on the subject, and the display was created – in true lockdown spirit – from home. Curator Sophie Waring has so far only been into the exhibition physically three times.

Past the Science Museum’s IMAX cinema, where it will be showing BBC Earth’s Antarctica 3D as part of their climate-themed programming in the run-up to the Cop26 conference in November, lies a compact exhibition space.

Our Future Planet is a small display, situated in an open-planned area with high ceilings and touch-free interactive displays that allow for social distancing. In a limited amount of space, this exhibition gives a brief insight into the latest carbon-sequestering tech. It can get technical at times though and is probably not suitable for young children.

Waring designed the exhibition with sustainability in mind. A lot of the showcases, AV equipment, and networks are reused from the previous display and the majority of objects are locally sourced. 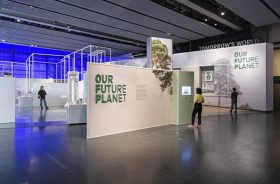 The small exhibition makes good use of its limited space © Science Museum Group.

The exhibition starts with showing quite simply what fossil fuel is, which is surprising in its simplicity. A large black fossil with a leaf imprint twinkles from behind a glass casing. Fossil fuels are just what they say on the tin: fossils, decomposed organisms that are burnt to produce energy.

This first section of the exhibition takes the viewer back to basics. A white trellis filled with screens depicting different trees towers over the glass cabinets below that tell the story of carbon and how we got to where we are today.

Diagrams, maps, and infographics explain the natural carbon sinks that exist all over the world, from mangroves to peat bogs. The exhibition emphasises the importance of preserving these natural CO2 extractors first, before moving onto the man-made carbon capture tools that have been developed recently.

The standout object is Klaus Lackner’s Mechanical Tree prototype on loan from the University of Arizona. This tall mechanical structure features rows of what looks like strips of light bark – paper that absorbs CO2 from the air. Once full, these strips are lowered into the water trough below where CO2 is extracted and bubbled off to be used to make fire hydrants. 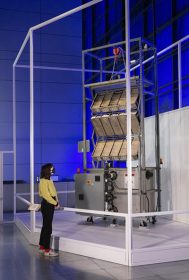 The accompanying description makes this unassuming object much more exciting. A cluster of 12 mechanical trees can absorb the amount of carbon dioxide produced by 44 average UK homes annually. It would be even better if the description included how much energy it takes to create and run the mechanical tree, allowing the viewer to weigh up the efficacy of this tool in combatting climate change.

Climeworks is a similar device developed by a Swiss company. This squat, circular metal object looks like an industrial fan you’d see on top of a supermarket building. It’s actually a carbon capture unit that removes 50 tonnes of CO2 from the atmosphere every year – the same amount produced by six homes annually.

So far, 15 of these direct air capture sites have been built across Europe and out of all of the tools displayed in Our Future Planet, this one seems the most feasible. It’s easy to imagine one of these objects purring away on top of an office. But again, it would be good to know how much energy the machine burns through.

Ending on the weird and wonderful, the exhibition displays unlikely products that have been created from captured carbon dioxide. There’s a bracelet, vodka, a yoga mat, and even toothpaste.

Short and sweet, the UK’s first-ever carbon capture exhibition is a testament to the incredible scientific advances made in the field over recent years. However, carbon capture is by no means a magic bullet to ending global warming and it’s good Our Future Planet acknowledges this at the start of the exhibition.

The display is part of an ambitious package of measures announced by the Science Museum Group this year to address the climate emergency, including a target to reach net-zero carbon emissions by 2033. But it remains to be seen how well the institution can engage the public on this issue while maintaining close ties with companies that bear so much responsibility for the crisis we’re in.