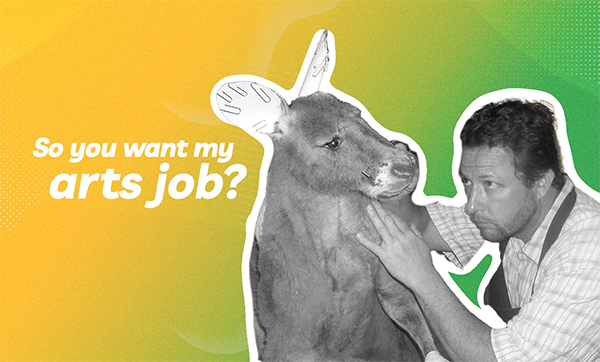 Do you have a strong stomach and keen love for natural history? Then read on to find out what it’s like working with specimens and taxidermy as a Museum Preparator.

Starting out as a volunteer and now Museum Preparator of 30 years at the Melbourne Museum, Dean Smith’s daily work could range from de-fleshing washed up whales to recording taxidermy data for researchers.

Alongside being a Senior Preparator, Smith is also the Director of Environmental Creations, which offers professional ‘museum quality’ natural history displays. His work can be seen both within and outside of museums, including at the Butchers Shambles at Sovereign Hill and installations at the University of New England Natural History Museum.

Specimens that have gone through his hands include bluebottle jellyfish, giant-sized bull ant models, a true-to-life white pointer shark, kangaroos, lions and many more.

Together with Ewin Wood, Smith has a dedicated studio, Museum Makers in Castlemaine, Victoria catering to different projects.

Acquiring his skills in a museum environment with help from staff whose experience and techniques span centuries, Smith provides professional presentations and training programs, as well as short workshops for those who want to take home an intricate piece of taxidermy art.

How would you describe what you do?

A Museum Preparator is a unique role within Museums Victoria where we prepare material and objects for the the Sciences department’s collections, education and exhibitions.

How did you get started in your career?

I have always had an interest in natural history and the general sciences. Following an opportunity to do my work experience during high school at the Melbourne Museum, I was adamant that I wanted to have a career as a Museum Preparator.

I volunteered in the department as I was furthering my sciences studies at night school. A position became available after a few years of this, and 35 years later I am still employed as a Preparator at the Museum.

Morning check through gallery spaces, carry out repairs and maintenance as required, such as sculpting a model of a botanical specimen for an upcoming exhibition, or skinning a defrosted specimen for completion on another day as a taxidermy mount. 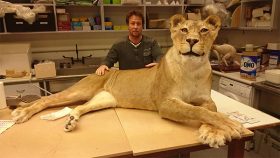 Dean Smith in the studio with taxidermy. Image: courtesy of Environmental Creations and Dean Smith.

What’s the most common misconception about being a museum preparator?

The Museums Victoria Research Institute has an extensive collection of taxidermy mounts, skeletons and study skins; we have freezers full of specimens requiring skinning and preparing every week.

One of the most important aspects of these duties is to record an extensive amount of data. Not all the taxidermy goes on display, but a lot of the specimens are regularly used for research, so the data we
record is as important as the mounted animal.

If you were interviewing someone for your job, what skills and qualities would you look for?

They would have a very keen eye and love of natural history, anatomy, sculpting, moulding/casting knowledge and fine detail painting skills. You would also need a strong stomach as you could be de-fleshing animal corpses, including a whale washed up on a remote beach.

What’s the best thing happening in your field at the moment?

The ability to incorporate 3D modelling into our techniques, applying rendering or printing from three-dimensional (3D) scans that we have made off original objects. This allows us to make a replica of a museum object that traditional moulding and casting methods could damage. We can even introduce 3D printing into our taxidermy manikins onto which the tanned skins are mounted.