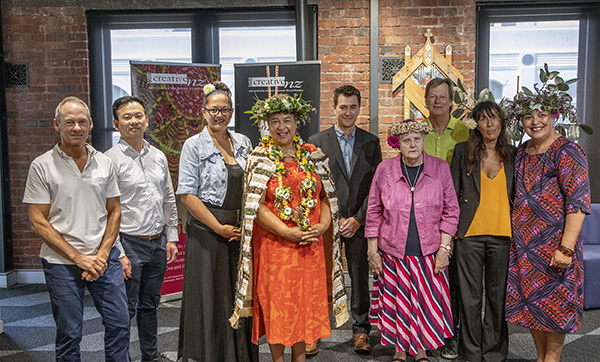 Following an announcement from the Ministry for Culture & Heritage this morning, Creative New Zealand is thrilled to share that Caren Rangi has been appointed as the new Chair of the Arts Council of New Zealand Toi Aotearoa (our governing body).

“We welcome the news that Caren Rangi has been mandated by the Government to be the next Chair of the Arts Council of New Zealand Toi Aotearoa. Caren’s deep knowledge of our work in the arts, technical training and her deep cultural expertise and connection to the Cook Islands and Te Moana Nui a Kiva ensure a powerful perspective at the Arts Council, the group responsible for our governance work,” says Creative New Zealand Chief Executive Stephen Wainwright.

“In addition to Caren’s considerable governance, government and cultural knowledge and experience from sitting on the boards of Radio New Zealand (te Reo Irirangi o Toi Aotearoa), NZ on Air (Irirangi te Motu) and Te Papa Tongarewa the Museum of New Zealand, she adds terrific context to our work in the arts and culture space. Caren builds on the legacy and significant contribution of many wahine Māori and Pasifika who have been leaders in the arts and for our communities.”

He continues, “In addition to her professional attributes that have led to Caren having the confidence of the Minister and the Government to undertake the demanding role of chair, there is also Caren the person. In her time as Acting Chair Caren has demonstrated the many qualities of leadership required of a chair which makes us confident about our future together, not least of which is a ready wit, enormous goodwill and appetite for the considerable mahi that comes with the job.”

“Caren bringing her leadership skills and multi-cultural worldview to the position of Arts Council Chair is timely as Creative New Zealand continues to strengthen and broaden our strategic work to reach diverse creative communities around Aotearoa, for the world. She is deeply respected by our Pasifika communities for her lifetime of public service and commitment to arts and culture to help shape our inclusive national identity,” says Senior Manager Pacific Arts Makerita Urale.

Caren Rangi has been appointed as the new Chair of the Arts Council of New Zealand Toi Aotearoa (Creative New Zealand’s governing body) for a three-year term.

Ms Rangi will be the first Pacific Chair and third woman to hold this role of Chair of the Arts Council in its 55-year history.

“Caren Rangi is uniquely qualified for this role given her experience in public sector governance, as well as her involvement in and services to Pacific communities”, says Minister for Arts, Culture and Heritage Carmel Sepuloni.

Ms Rangi was appointed to the Creative NZ board in 2014, has been Deputy Chair from 2017 and has been acting Chair since December 2020. Ms Rangi is an experienced public sector governance practitioner and a qualified chartered accountant. She is currently a board member of Museum of New Zealand Te Papa Tongarewa and Radio New Zealand, director of Pacific Cooperation Broadcasting Ltd and Pacific Inc, and Chair of Pacific Homecare Services. Ms Rangi is also a director of the Cook Islands Investment Corporation in Rarotonga.

“I am thrilled to be taking up the role of Chair of the Arts Council of New Zealand Toi Aotearoa, and to continue strengthening arts and culture experiences for all New Zealanders,” says Ms Rangi.