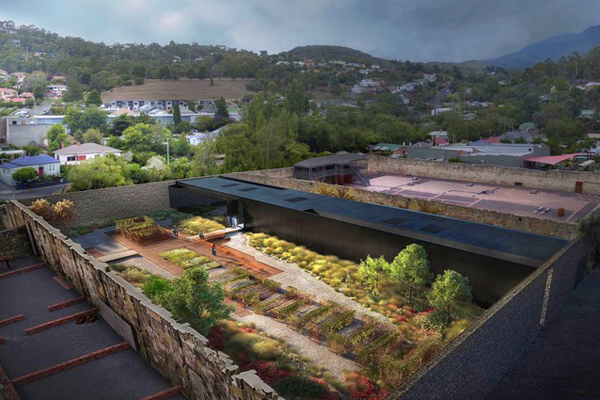 The competition called for a new history and interpretation centre at the former convict site.

“[Their] design best embodies the heritage values of the site and one which will emotionally connect visitors to the extant heritage fabric of the site and the stories of women who passed through it,” said jury chair Sharon Sullivan, chair of PAHSMA.

The Cascades Female Factory is Australia’s most significant historic site associated with female convicts. It was originally built as a distillery in 1823 until it was sold to the colonial government and converted for use as a prison for women by colonial architect John Lee Archer in 1828. The site operated as a convict facility until 1856. More than 6,000 convicts were incarcerated at the Cascades Female Factory. The women housed at the facility were subjected to up to 12 hours of labour per day.

The proposed centre will occupy an original yard on the historic site, with a rectilinear building and a landscaped courtyard.

“The proposed design concept unravels the stories of the more than 6,000 women who spent time within the walls,” said Liminal Studio in a design statement.

“Through contained form, spatial design, and integrated landscape, the proposal explores the representation of the plight of the convict women. The exploration of the struggle between light and dark, imprisonment and liberty, punishment and reform, threat and opportunity, horror and hope, aims to provoke a visceral experience for the visitor and connect them to the experience of the convict women.”

The contrast between the building and the landscape will convey the dichotomous narrative of the site’s history.

“We had the idea of a sombre, harsh, dark building and uplifting, positive elements, connecting to a positive future in the landscape,” said Peta Heffernan, director of Liminal Studio.

The building will be made with black metal cladding with a dark interior experience. Glass box protrusions – or “drawers of curiosity” in reference to museum displays – will be made from black glass, which will allow some light into the space, but importantly, it will also reflect the proposed landscape.

“There’ll be this literal reflection with you in the landscape. That was an important dialogue between the reflection of the building,” Heffernan said.

“The contrast between the building being constrained and the landscape representing the release and the hope and reflection and the future. It was really important for us to get the contrast of experience.

“The landscape symbolizes the healing and the erosion of imprisonment.”

The landscape experience will culminate in a open forum – an “empathetic amphitheatre” or “empatheatre” space which is intended to be used as place for storytelling, performance, re-enactments, education and events.