The Museum of Central Australia will host CAVEPS 2015. 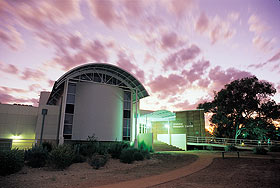 The Museum of Central Australia in Alice Springs will host the 15th Conference of Australasian Vertebrate Evolution, Palaeontology and Systematics (CAVEPS), a biennial meeting of palaeontologists and evolutionary biologists from around the world, held in the heart of Australia at Alice Springs in the Northern Territory.

CAVEPS is a multidisciplinary forum that showcases research from all fields directed at understanding the past, present and future of Australasia’s vertebrate fauna and their environments.

Fields of research include but are not necessarily limited to: vertebrate morphology, phylogeny, development, taphonomy, taxonomy, evolution, zooarchaeology, palaeoecology and ancient environments. We also encourage neontological researchers and researchers from outside Australasia who may have a more global focus to their research to contribute to CAVEPS 2015.

CAVEPS will feature a pre-conference field trip to the south of Alice Springs to vertebrate fossil sites, including Ordovician marine vertebrates to Oligocene terrestrial vertebrates and an early Holocene lakeside community as well as the spectacular natural features of Rainbow Valley and Chambers Pillar.

The next four days will feature presentations from attendees with three themed symposia that reflect either the importance of Central Australia in understanding the evolution of Australian vertebrates or its strengths in the vertebrate fossil record. These include:

The conference will conclude with a spectacular outdoor dinner, nestled within the famous and iconic MacDonnell Ranges.

Attendees can then take part in another field trip, to visit the famous vertebrate fossil locality of the Alcoota Scientific Reserve, which is perhaps the largest, single-bed concentration of terrestrial vertebrate remains on the Australian continent.

The conference will be at the Alice Springs Convention Centre, which is just a 15 minute walk from the civic centre.