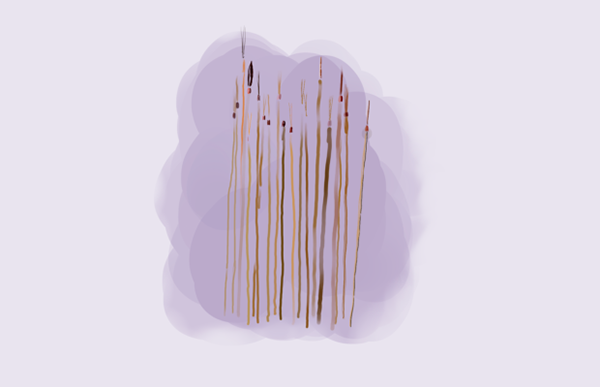 Ethan Floyd & Khanh Tran, The Kamay spears: an Indigenous history, a colonial legacy, and an uncertain future, Honi Soit, 8 May 2022

Currently being displayed at the Chau Chak Wing Museum, repatriation of the stolen spears is highly significant for the Gweagal community.

What are the Kamay spears?

Three spears stolen by Lieutenant James Cook from Kamay or Botany Bay in modern-day Sydney are on exhibition for the first time in their home since being dispossessed more than 250 years ago. The exhibition, called ‘Gamay gamaiwulawala: Dhaluga, nhaway ba bariyu’ or ‘Kamay (Botany Bay) spears: Yesterday, Today and Tomorrow’, will run until 10 July 2022 at the Chau Chak Wing Museum.

The exhibition is a joint effort by the University, the La Perouse Local Aboriginal Land Council, the Gujaga Foundation, the Cambridge Museum of Archeology and Anthropology and the National Museum of Australia (NMA).

Held by the Museum of Archeology and Anthropology at Cambridge University and Trinity College Cambridge, the spears are currently a part of a collection of artefacts stolen by Cook on the Endeavour Voyage of 1770. After their dispossession, the spears were acquired by John Montagu, the 4th Earl of Sandwich.

As an old Etonian and Trinity alumni, Montagu donated the spears as part of the College’s ‘Sandwich Collection’. Trinity is Cambridge’s wealthiest college with a vast inherited wealth which is currently sitting on a hefty $3.48 billion endowment.

They remained in Trinity’s possession until 1914, when they were passed onto the Museum of Archeology and Anthropology.

The three spears on display are among the few still in existence today. According to the CCWM, only four of the original forty to fifty spears survived following their theft in April 1770 by Cook, Banks and the Endeavour crew.

Chairperson of the Gujaga Foundation, Ray Ingrey, said in an interview with Honi that the current exhibition allows his community to relay their perspective and story.

“Our community said straight up that we want to tell our story our way, and that was well received by the Chau Chak Wing Museum,” Ingrey said, highlighting the joint efforts to bring the artefacts back to Sydney (Gadigal nation), as the spears are currently on loan to the NMA.

On the prospect of repatriating stolen artefacts, Ingrey notes that a significant obstacle lies in the UK’s harsh laws governing its museums and artefacts. In a colonial legacy from the 18th century, British museums are bound from repatriating their collections to rightful owners save for an extremely narrow set of circumstances: “We came to the realisation that UK laws are quite strong when it comes to repatriation”.

Although repatriation is ultimately the desired outcome of the Foundation, the organisation is leveraging its focus on Indigenous language and cultural enrichment to educate the wider community about the artefacts and their significance.

“For us, to have them back means a lot, our elders when they realised that, look, repatriation may not be on the cards, they quickly came to work on this positive relationship with cultural institutions overseas,

“So it may not be repatriation, but it’s better than nothing,” he explained. Ingrey said that the Foundation is currently working with the NSW Government to implement a “museum-grade” facility at Kurnell, Cook’s landing spot, where artefacts can be preserved for generations to come.

In a statement, Vice-Chancellor (Indigenous Strategy and Services) Lisa Jackson-Pulver thanked the various community stakeholders who collaborated on the exhibition.

“Far too much of our collective history has been removed, acquired, borrowed or simply stolen. The time for people not from the respective community and those who are non-Aboriginal to have the privilege of what should happen next to such items has rightly passed,” she said.

“The community has entrusted the Gweagal spears to the Museum so they can have time with them, honour their journey and respectfully share the story they hold. They have generously permitted public viewings of the Gweagal spears – and should be seen as an opportunity [to] pay respects and see these items first hand.”

Cambridge’s Museum of Archeology and Anthropology did not respond to requests for comment.

Khanh Tran is an editor of Honi Soit and a member of the Autonomous Collective Against Racism.

It is April of 1770. The Endeavour nears the shoreline of Australia’s east coast. It is entering the Kamay, the sacred bay in which the Gweagal people thrive. Through the headlands, closer to the shore, it resembles “a big bird [with] something like possums running up and down about [its] legs and wings”.

There are people standing on the shore as Cook weighs anchor. Smoke from campfires trails the white men who trek over the great mountains west of Sydney; black people watch these people who appear like ghosts.

They are Berewalgal, yes, strange men from far away.

The Gweagal warriors, who had kept close watch of the Endeavour and its crew since its sails emerged from over the horizon, resist this unwelcome encroachment on their land. Entering the bay was one thing. But the Berewagal setting foot on this land?

If the exact translation is not apparent, at least its meaning is:
“Leave! Leave our land! Leave us!”

As the Berewagal reach the shore in their strange canoes, the Gweagal warrior Cooman readies himself for a confrontation. He raises his shield in defence as one of Cook’s men opens fire, the bullet ripping through Cooman’s upper thigh.

The invading force seizes Cooman’s shield, along with a collection of forty to fifty fishing spears, and sends them back to England in a presciently violent opening act of Australian east coast Aboriginal and European contact.

A new generation of Gweagal warriors: the push for repatriation

This theft was the opening salvo of Britain’s brutal colonisation of the Australian continent, and for the next 250 years, the spoils of the expedition remained housed at the University of Cambridge in England, more than 15,000 kilometres away from Australia. Now, the descendants of the Gweagal nation say these symbols of oppression and resistance must come home, and not just on loan.

Indigenous families and community leaders in the La Perouse area — namely among them Uncle Rodney Kelly, a sixth-generation descendant of the warrior Cooman — want the Kamay spears, now on display at the University of Sydney’s Chau Chak Wing Museum, to be returned permanently.

“These are the only objects that we know, definitely, were taken during first contact in 1770. We want to see more access to them”.

This is a sentiment echoed by Aunty Noleen Timbery, Chairperson of the La Perouse Aboriginal Land Council.

“Yes, the spears are returning to England, they’re going back to Cambridge, [and] repatriation is something that hasn’t really been touched on,” she explains.

She, along with many other community members in the La Perouse area, agree that returning these artefacts to traditional owners will be a complex and difficult process.

“There are so many more artefacts over there, [and] that’s a conversation I want to keep having, is how do we get access to these other really important markers of our history?”

Repatriation in action: why haven’t we done more?

In congruence with strict UK laws around artefact repatriation, the Kamay spears are also rendered legally immune under Australian law from Indigenous claim by the 2013 Protection of Cultural Objects on Loan Act (Cth). The act was legislated precisely to prevent a repeat of the seizure by Gary Murray of the Dja Dja Wurrung barks from the British Museum collection on loan to the Melbourne Museum in 2004.

The quest to have the Kamay spears returned does, however, appear to be winning greater mainstream political support that has been absent in the past. In August of 2016, the New South Wales parliament passed a bipartisan motion acknowledging Gweagal ownership of the artefacts and urging their repatriation.

Since then, a number of key stakeholders have called for the permanent repatriation of the Kamay spears, the Gweagal shield, and other significant artefacts back to the lands of their traditional owners.

But they also view a long-term loan to a Sydney-based collecting institution, such as the Australian Museum or – indeed – the Chau Chak Wing Museum, as a critical first step towards permanent repatriation to Country.

Just out of reach: where do the Kamay spears go from here?

Indigenous communities agree that, regardless of the outcome of a push for repatriation of the spears and other dispossessed artefacts, there must also be a tangible commitment to truth-telling about the events of the Endeavour’s landing at Kamay in 1770.

Noleen says it’s important to remember, “Cook may have written [about us] in his journals, but when the Endeavour cruised into Botany Bay, he became part of our stories too”.

The Kamay spears will continue to be on display in the University of Sydney’s Chau Chak Wing Museum until the 10th of July 2022, when they will return to England to be displayed in the Cambridge Museum of Archaeology and Anthropology.

Ethan Floyd is a proud descendant of the Wiradjuri and Wailwan peoples of the Ngiyampaa nation. He is a first-year Arts student at USyd, and works with remote Indigenous communities on language revitalisation and cultural engagement.