Collections are at the heart of a museum. A museum’s exhibitions and research are built from its collections. The significance of collections means it is important to acknowledge those who have contributed. 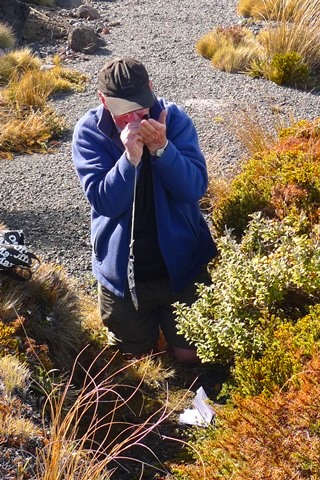 Peter Beveridge has collected over 5000 plant specimens for Te Papa. These are mostly mosses and liverworts. These are small plants; in this image, Peter is using a hand-lens for a closer look. Indeed, precise identification often requires examination with a microscope. Photo Leon Perrie. © Te Papa.

Peter volunteers his time and expertise to help Te Papa develop its collections. In his retirement, he has become expert with mosses and liverworts. Few New Zealanders are knowledgeable about these individually tiny but ecologically significant plants. Te Papa (and the nation) is fortunate to have his help.

Peter apparently has an inordinate fondness for the moss Sematophyllum amoenum, which he has collected 49 times. Other popular species – all mosses – are Camptochaete arbuscula (42), Zygodon intermedius (40), Macromitrium gracile (39), and Fissidens leptocladus (38).

In 2013, Peter co-authored a scientific paper describing a liverwort – Lejeunea hodgsoniana – that had been first found by others. Subsequently, he has worked on papers describing several new species of liverworts that he has discovered.

Pat has worked for the museum since before the year dot. He was a Botany Curator, but now works as a Research Fellow, fulltime on externally funded research.

Pat’s research focuses on ferns, and he has described at least 14 new species or subspecies. He has authored or co-authored over 100 scientific publications, including the book New Zealand ferns and allied plants.  Pat is now working on the fern component of the electronic Flora of New Zealand.

More on the electronic Flora of New Zealand.

Pat has over 2500 collections of more than 500 different species of ferns and lycophytes. But the majority of Pat’s collections are mosses, with nearly 7000 specimens representing more than 450 species. Popular ferns for Pat are the spleenworts Asplenium gracillimum (51), Asplenium hookerianum(34), and Asplenium flaccidum (33).  His most collected mosses are Thuidium furfurosum (83),Sematophyllum amoenum (79), Achrophyllum dentatum (78), Bryum billardierei (77), and Cyathophorum bulbosum (72).

Te Papa has some 300 000 collections of plant specimens, give or take 10 000 or so. (Cataloguing of the collection is ongoing.)

Between them, Pat Brownsey and Peter Beveridge have collected 30% of Te Papa’s nearly 37 000 moss specimens. The rest have been contributed by some 560 different collectors.

Te Papa’s natural history collection, spanning plants and animals, is estimated to include some 1 400 000 “lots”. (Each lot is a single specimen, or multiple specimens of the same species collected at the same time.)

The people with the most databased lots in Te Papa’s natural history collection are:

Of the above, only Walter Oliver was a staff member of the museum. Among the current natural history staff, Patrick Brownsey and Alan Tennyson (c. 7500, mostly fossil vertebrates and birds) have the most (databased) collections.