The oldest custodian of science in Australia has chosen Tim Flannery as the first recipient of its lifetime achievement award from its rebadged research institute.

The announcement was made by the Australian Museum on Monday.

Dr Flannery lost his job as chief commissioner of the Climate Commission when it was abolished in one of the first acts of the government after Tony Abbott became Prime Minister.

Since then, the federal government has further angered the science and research sector after announcing budget cuts of $420 million from several organisations, including the CSIRO, the Australian Nuclear Science and Technology Organisation, the Australian Research Council, and the Co-operative Research Centres. Last week, Abigail Allwood, the first woman and Australian to lead a NASA team that will search for life on Mars, labelled the government’s slashing of its science budget as “tragic and embarrassing”.

Australian Museum director Kim McKay said the nation’s scientists needed to be celebrated, and the work of former museum employee Dr Flannery, an internationally acclaimed researcher, explorer and conservationist, was an obvious first choice to honour.

Last week, the 187-year-old museum also unveiled its new Gerard Krefft meeting room, honouring its seventh curator, a passionate advocate of the then new Darwin theory of evolution. Mr Krefft railed against creationist critics despite the long term damage to his professional career.

“I think our scientists are fearless,” Ms McKay said. “It’s really important to give scientists a sense their work is collectively held in esteem and has a purpose.

“Science has been under attack. There is no secret that major industry groups fund communication campaigns to cast doubt on the work of scientists. You only have to sow the seed of doubt to undermine the work.”

On Monday, Ms McKay and NSW Arts Minister Troy Grant will launch the Australian Museum Research Institute, a new initiative to promote high-quality research into the unsolved questions of the natural world.

Ms McKay said integrating the work of research scientists under the Australian Museum Research Institute would help focus public attention and support on these four pillars of scientific research and their practical applications in policy and planning.

“The museum’s research expertise is not replicated at universities or other research institutions, which uniquely positions us to address areas of significance to society such as environmental health, biodiversity loss, climate change and biosecurity,” she said.

The University of NSW dean of science and Australian Museum trustee, Merlin Crossley, said the research carried out by the insitute’s scientists, along with the museum’s exceptional collections, would allow the story of the natural world to be told for generations. 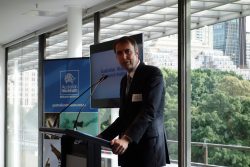 Professor Merlin Crossley at the launch of the Australian Research Institute. Photo: Meredith Foley
Positions Vacant » View All
» Exhib & Creative Services Officer – Otago Museum
» Curator (Pacific) – TMAG
Latest News » View All
OM’s Ian Griffin names asteroid 53109 for
Martinphillipps Dunedin's Chills frontman Read more.
7 Pillars of Audience-focus – change from
product, to marketing, to audience-focus Read more.
A New Approach’s vision for arts & culture
- technocratic neoliberalism? Read more.
We can fund the arts in better ways
- a Smart Fund managing a levy partnership? Read more.
MA UK report on Redundancies –
after one year of Covid Read more.
Top +
Council of Australasian Museum Directors, c/o Ms Daryl Karp, Museum of Australian Democracy at Old Parliament House PO Box 3934 Manuka, Australian Capital Territory 2603 Australia, © CAMD 2021
Copyright: All information and resources provided on this website remain the copyright of the Council of Australasian Museum Directors. Permission is granted for viewing and downloading for personal and not for profit purposes. Those wishing to reproduce any materials for commercial, educational or other uses are requested to contact us.
Disclaimer: The content of this website is provided for information purposes only and is not intended as a substitute for professional advice. No claim is made as to the accuracy or authenticity of the content of the website. The Council of Australasian Museum Directors does not accept any liability to any person for the information or advice (or the use of such information or advice) which is provided on this website. The information on our website is provided on the basis that all persons accessing the site undertake responsibility for assessing the relevance and accuracy of its content. No responsibility is taken for any information or services which may appear on any linked web sites. Hostgator.
.